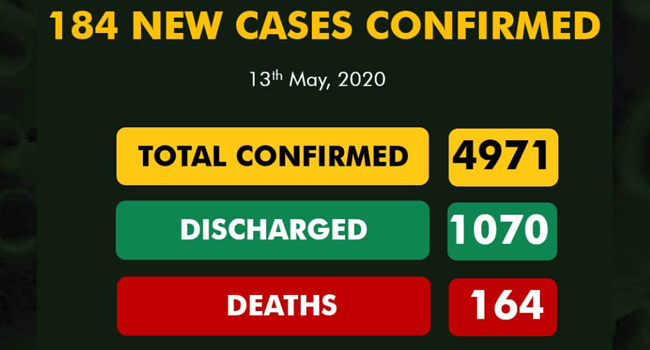 Nigeria has recorded 184 new cases of the novel coronavirus, bringing its total infections to 4,971.

The Nigeria Centre for Disease Control confirmed the new figures in a tweet late Wednesday.

While the number of discharged cases grew to 1,070, the NCDC said six more people had died from the virus since Tuesday, bringing the nation’s total toll to 164.

The novel coronavirus has killed at least 294,199 people since the outbreak first emerged in China last December, according to a tally from official sources compiled by AFP at 1900 GMT Wednesday.

The tallies, using data collected by AFP from national authorities and information from the World Health Organization (WHO), probably reflect only a fraction of the actual number of infections.

Many countries are testing only the most serious cases.

Britain has the second highest toll with 33,186 deaths from 229,705 cases. Figures compiled by British regional health agencies put the number of fatalities at over 36,000. But these include cases where COVID-19 is only suspected to be the cause, in addition to people who tested positive.

The country with the highest number of deaths compared to its population is Belgium with 76 fatalities per 100,000 inhabitants, followed by Spain with 58, Italy 51, Britain 49 and France 41.

In the past 24 hours, Lesotho has recorded its first infection.