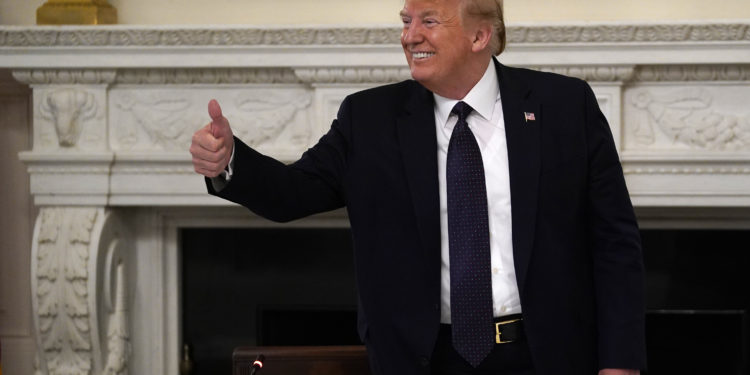 President Donald Trump gestures as he leaves a meeting with restaurant industry executives about the coronavirus response, in the State Dining Room of the White House, Monday, May 18, 2020, in Washington. (AP Photo/Evan Vucci)

U.S. President Donald Trump said on Monday he is taking hydroxychloroquine, a malaria drug that he has touted despite medical warnings about its use, as a preventive medicine against the coronavirus.

“I’ve been taking it for the last week and a half. A pill every day,” Trump told reporters.

Trump made the disclosure during a question-and-answer session with reporters during a meeting with restaurant executives about the impact of the virus.

Weeks ago Trump had promoted the drug as a potential treatment for the virus but subsequent studies found that it was not helpful.

Trump, 73, who is tested daily for the virus, said he had asked the White House physician if it was OK to take the drug, and the doctor told him, “well, if you’d like it.”

The disclosure came as Moderna Inc reported progress in a potential vaccine for the virus. The only drug that has emerged as a potential treatment is Gilead Sciences Inc’s remdesivir, a drug reserved for hospital patients.

“There’s no effect that we have seen and we have treated multiple patients with it,” he said.