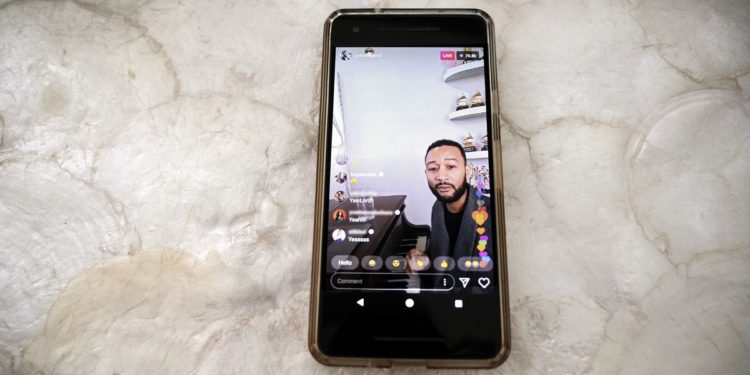 From gigs to plays and quizzes, live entertainment has moved online during coronavirus lockdown – and creative minds are coming up with new ideas to give us back some of the human connection we’ve lost.

Every Saturday for the past two months, Snow Patrol singer Gary Lightbody has sat down and written a song.

He asks them for chords, comes up with melodies, and puts them to a vote. He then asks for ideas for lyrics before coming back an hour later with a finished track. “Some are really good,” he says.

Lightbody also performs solo online gigs from home, but wanted to do something more collaborative too.

“You can say absolutely anything in this. It’s therapeutic and cathartic for me,” he explains.

“In a ‘gig’, I chat a little bit, but you can’t really read the comments because you’re playing songs. But with this, it feels like you’re engaging with everybody.”

The fans also vote for the set lists in his regular online concerts. “I could just choose a bunch of songs that I want to play, which I did do one week and it just didn’t really work,” Lightbody says. “It just felt a little disconnected.

With the communal thrill of congregating in the same room currently out of the question, Lightbody is among the artists to have come up with interesting ways to bring people together.

When his Saturday Songwrite sessions have generated 10 or 12 decent tracks, he’ll release an album for charity – although he hasn’t settled on a charity yet. “It might be best to put that to a vote as well.”

Few musicians haven’t done online performances, which can have an intimate charm (but can also be quite dull, beyond the voyeuristic kick of having a nosey in their houses).

Lightbody recommends fellow Northern Irish singer Roe, who could teach the bigger names a thing or two about audio and video quality.

Some performers get their fans involved – whether by taking requests or doing Q&As, virtual charity festivals or tutorials like Duran Duran star John Taylor with his bass masterclasses and Oti Mabuse with her dance lessons.

Listening parties have also been a big hit. Charlatans frontman Tim Burgess has carved out a sideline as host of #timstwitterlisteningparty. Fans and musicians listen together in real time, tweeting their thoughts and memories.

“There’s power in listening and knowing others are doing so at the same as you,” Burgess told The Sunday Times.

In the US, Swizz Beatz and Timbaland – who staged a song-for-song producer clash in 2018 – now run a regular lockdown face-off, inviting different stars to go head-to-head in weekly Verzuz battles on Instagram.

Erykah Badu and Jill Scott‘s recent battle was more of a love-in, and drew 700,000 live viewers.

Beyond music, lockdown may turn out to be a tipping point for activities like quizzes, choirs, and exercise, yoga and cookery lessons, which have found new leases of life online (despite the inevitable loss of the human touch).

In theatre, as in music, it’s hard to replicate the live experience on screen. But some are using technology to create a new kind of show.

Although monologues have been filmed in lockdown and pre-recorded shows have been put online, they often can’t capture the excitement of being in an audience. Plus, the magical, fantastical storytelling of theatre doesn’t translate well to the screen.

“What doesn’t work is watching streaming of plays on computers,” playwright Simon Stephens told BBC Radio 4’s Front Row last week. “Whenever I watch those I just feel lonelier than I felt before.

“What is interesting is when writers, directors, actors and designers start thinking about – what are the dramatic potentials of Zoom?”

In recent weeks, creative types have been exploring just that.

“I’m fascinated by the format, which is a completely new kind of way of putting on a play where paradoxically you stay home and live theatre comes to you,” Sir Tom said.

The show tried to replicate something of the live experience, with audience members buying a ticket in advance and turning up at an allotted time – the performance deliberately wasn’t put online to watch afterwards.

It had professional crew, including video, lighting, costume and sound designers, and the actors (all at home, obviously) entered and exited their quarters of the screen as they would a stage. “The cast were saying they were so nervous, like ‘I really felt like I was standing in the wings,'” says producer Matt Humphrey.

“We want to show other people that this can be done and give confidence to other people that live theatre still has a place during lockdown.” And he believes such Zoom-style shows will still have a place when quarantine lifts.

The Guardian’s five-star review declared: “If, for however long, this is live theatre’s future, then it works triumphantly.”

Another Zoom theatre triumph got the audience fully involved from their sofas.

In a playful version of The Tempest from Northern Ireland-based theatre company Big Telly and Oxford’s Creation Theatre, viewers were asked to help out by doing things like making storm sound effects and pretending to be a flock of birds. The most enthusiastic were spotlighted on screen for the rest of the audience to see.

Another show, Operation Elsewhere, was originally “an immersive theatre game” played in the real world. When the world locked down, it was hastily reworked for Zoom – also with lots of audience participation.

“People turn all the lights off and get under blankets because we need cover of darkness,” Big Telly artistic director Zoe Seaton explains. “There was one point where a character says, ‘If you’ve got war paint get it on now’, and you see people rushing to the kitchen and getting ketchup and things.”

Virtual backgrounds and green screens can create settings and effects that would be difficult and expensive in real life. “I’m really enjoying it because it feels like a new box of tricks, a new way of telling stories,” Seaton says.

People have been tuning in from around the world and using the shows to have a shared night “out” with separated family members.

“The joy of seeing your nephew and niece in Canada doing something in the same show that you’re part of has just been amazing,” Seaton says. “We’re interested in taking that further.

“We work in rural communities in Ireland mostly, as well as Belfast and Derry, and suddenly our audience are in Brooklyn, and you think, oh gosh!”

The key has been inviting the audience to bring the shows to life, Seaton adds. “They have had that sense of community that theatre has, where you’re all on the same journey.

“That’s their main success. I think that’s what people are missing in lockdown – that sense of community.”