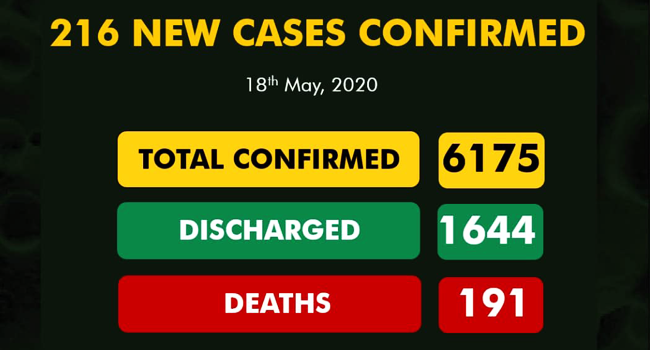 Nigeria has recorded 216 new cases of the novel coronavirus, the Nigeria Centre for Disease Control confirmed on Monday.

Other states with new cases include Edo with 13, Zamfara 10, the trio of Ogun, Gombe and Borno with eight each, the duo of Bauchi and Kwara with seven each, the FCT with four, Kaduna and Enugu with three each and Rivers state with two new cases.

The health agency also reported that 1,644 cases have now been successfully treated and discharged, while 191 persons have died.

Earlier on Monday, the federal government chose not to further lift lockdown measures imposed by the COVID-19 pandemic.

Instead, the government maintained restrictions such as the closure of schools, airports and religious centres for another two weeks.

“The reality is that in spite of the modest progress made, Nigeria is not yet ready for full opening of the economy and tough decisions have to be taken for the good of the greater majority,” Chairman of the Presidential Task Force on COVID-19, Boss Mustapha said in a briefing on Monday in Abuja.

“Any relaxation will only portend grave danger for our populace. Advisedly, the current phase of eased restriction will be maintained for another two weeks during which stricter enforcement and persuasion measures will be pursued.”

The novel coronavirus has killed at least 316,333 people worldwide since the outbreak first emerged in China last December, according to a tally from official sources compiled by AFP at 1900 GMT Monday.

The tallies, using data collected by AFP from national authorities and information from the World Health Organization (WHO), probably reflect only a fraction of the actual number of infections.

Many countries are testing only the most serious cases.

Corrections by national authorities or late publication of data mean the figures updated over the past 24 hours may not correspond exactly to the previous day’s tallies.

Lagos Orders All Schools Below Tertiary Level to Resume Jan 18