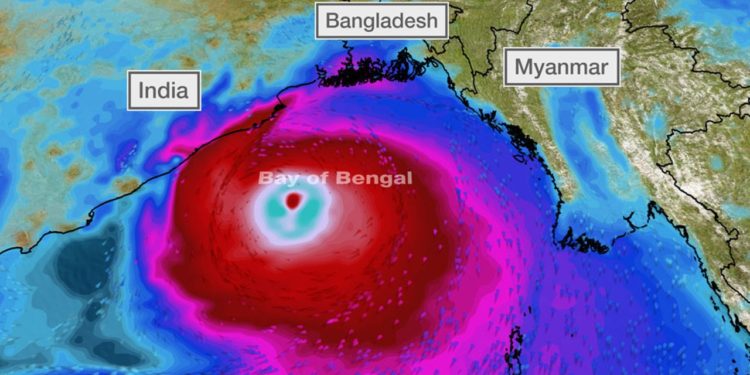 India and Bangladesh are evacuating millions of people from coastal areas ahead of a super cyclone which is approaching from the Bay of Bengal.

Cyclone Amphan is expected to make landfall in an area near the border of the two countries later on Wednesday.

More than 20 relief teams have already been deployed, and several more are on standby, Indian officials say.

The coronavirus outbreak is making it harder for officials in both countries to evacuate people in these regions.

Amphan is expected to hit the coast with winds gusting up to 185km/h (115mph), forecasters say.

Officials in Bangladesh fear it will be the most powerful storm since Cyclone Sidr killed about 3,500 people in 2007. Most died as a result of sea water surging in.

While the storm’s current wind speed is likely to reduce slightly before it makes landfall, India’s weather department is predicting the surge of water caused could be as high as 10-16 feet (more than 3-5 metres).

The cyclone comes as ten of thousands of migrant workers flee cities for their villages during India’s lockdown to curb the spread of coronavirus.

West Bengal and Orissa (Odisha) are among the Indian states that are seeing a larger number of them return.

Orissa has now cancelled trains which were due to arrive with thousands of migrants between 18 and 20 May.

And some district officials have barred entry into their areas and requested the state government to accommodate the migrants – many of whom are walking home – elsewhere until the storm passes.

The evacuation is expected to continue into Wednesday morning. Bangladesh’s disaster management minister has told the BBC that they plan to evacuate about two million people to safety.

Extra shelters have been prepared to allow for social distancing. Masks are also being distributed.

State officials in India are also struggling to find shelters for evacuees. In Orissa, for instance, 250 of the more than 800 existing shelters are being used as coronavirus quarantine centres.

So both states have asked for schools and other buildings in the areas likely to be hit by the super cyclone to be turned into temporary shelters – they need more than the usual numbers in order to house people while enforcing social distancing norms.

Around 50,000 people have been evacuated from areas near the Sunderban islands in India.

This would be the first super cyclonic storm in the Bay of Bengal since the 1999 super cyclone that hit the Orissa coast and killed more than 9,000 people.

India’s meteorological department has issued a “yellow alert” for the region, advising fishermen not to “venture into the south Bay of Bengal during the next 24 hours, and north Bay of Bengal from 18-20 May”.

The weather department said the storm is likely to move across the north-west Bay of Bengal and cross West Bengal and Bangladesh coasts from noon local time on 20 May as a “very severe cyclonic storm”.

It also warned of rough seas, with storm surges that could inundate coastal areas. India’s weather department is predicting that the surge of water due to the storm could be as high as 10-16 feet.