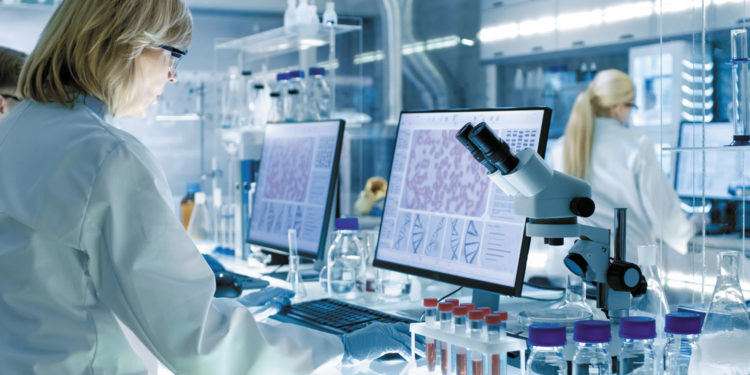 Senior Female Scientist Works with High Tech Equipment in a Modern Laboratory. Her Colleagues are Working Beside Her.

If the United States is the first to develop an effective vaccine against the novel coronavirus, it has to quickly share it with the world, the head of the National Institutes of Health, Francis Collins, told AFP in an interview.

President Donald Trump’s administration has suggested that while it would share its scientific knowhow, it would prioritize the production of doses for the US population from the get-go.

But Collins said he “absolutely” agrees with the French and Chinese leaders that a vaccine should be what they have called a “global public good,” and expressed particular concern for countries in Africa.

“Certainly if we had a vaccine that works, I would want to be sure as quickly as possible, it is available there (Africa) and in South America — look at Brazil right now,” Collins said.

“We have a great deal of responsibility. We, as the richest nation in the world, need not to just take care of ourselves. That would be a terrible outcome.”

Collins’ NIH — one of the world’s top research centers with a $42 billion budget — is partnering with private companies in the frantic race to find a vaccine against the deadly virus, which has killed more than 320,000 people around the world.

The Trump administration has set a goal of producing 300 million doses by January — enough to vaccinate the entire population.

But if the US succeeds, should it be required to export some of those doses to vulnerable populations in other countries, instead of offering it to otherwise healthy Americans?

Collins says yes, while cautioning that any forecast is based on “a lot of hope.”

“Personally, I would certainly think that should be a matter of greatest attention and not sometime in 2022,” he said.

“Maybe even as soon as the end of this year when we actually have the ability to do so.”

One of the more advanced experimental vaccine projects in the world so far is the one undertaken by US biotech firm Moderna, which is working with the NIH.

The company, which got a government grant of nearly $500 million, reported promising early results from its first clinical tests on a small number of volunteers on Monday.

The US government has also signed a contract with Paris-based pharmaceuticals group Sanofi, in order to ensure it gets priority on future vaccine production.

That deal sparked outrage in France, forcing the company to clarify that such priority would only be granted for vaccine doses produced in the group’s US factories.

Collins — a doctor and geneticist who has been the NIH director since 2009, serving under Barack Obama and Trump — admits that Washington’s approach could be seen as “America First.”

But the 70-year-old insists that international cooperation in the scientific community is happening.

“We do all believe that… everybody ought to have a chance to get access to something that may save their lives at a time of a pandemic like this,” he said.

“And we will do everything we can to work with other agencies and other countries to try to make that happen.”

When asked if labs should be able to profit from a product seen as a “global public good” for the world’s more than seven billion inhabitants, Collins is equivocal.

“I don’t think they should make a windfall, that’s for sure,” he said.

“I do think you have to be clear that companies are going to be spending billions of dollars to produce these vaccines, and you can’t expect that they should simply absorb that,” he explained.

“There has to be some reasonable compensation but they should not be in a circumstance where this turns into a big boost to their bottom line.”