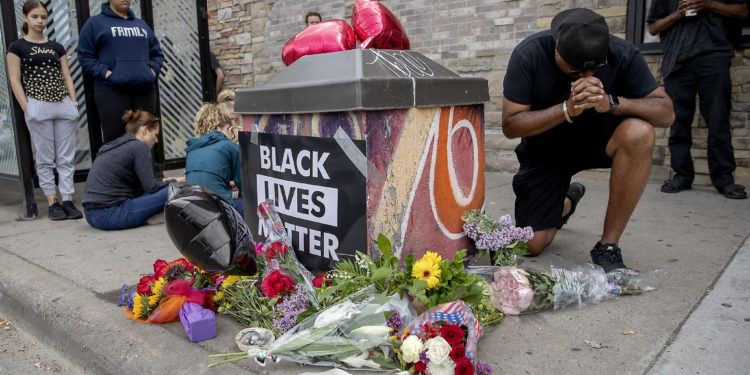 Four Minneapolis police officers have been fired for their involvement in the death of a black man who was held down with a knee as he protested that he couldn’t breathe, officials said Tuesday. The FBI is investigating the incident, which drew widespread condemnation of the officers after a video showing part of the encounter circulated on social media.The death of George Floyd, 46, drew hundreds of people to the streets of Minneapolis on Tuesday. Protesters — many wearing face masks — held “I can’t breathe” signs and chanted together near the site of Monday’s incident.

Some motorists honked in support.Later in the evening, police attempted to disperse the crowds outside the Minneapolis Police 3rd Precinct after a front glass window was smashed, John Elder, director of the office of public information for the police department, told CNN.The four officers were “separated from employment,” Officer Garrett Parten, a police spokesman, said Tuesday. “I support your decisions, one hundred percent,” said Mayor Jacob Frey, in a statement about police Chief Medaria Arradondo’s firing of the officers. “It is the right decision for our city. The right decision for our community, it is the right decision for the Minneapolis Police Department.”Officers responding to an alleged forgery in progress Monday evening were initially told that a person later described as the suspect was sitting on a car and appeared to be under the influence, police said. A pair of officers located the man, who was at that point inside the car and who police said “physically resisted” the officers when ordered to get out. Officers handcuffed the man, who “appeared to be suffering medical distress,” according to police. He died at a hospital a short time later, police said. 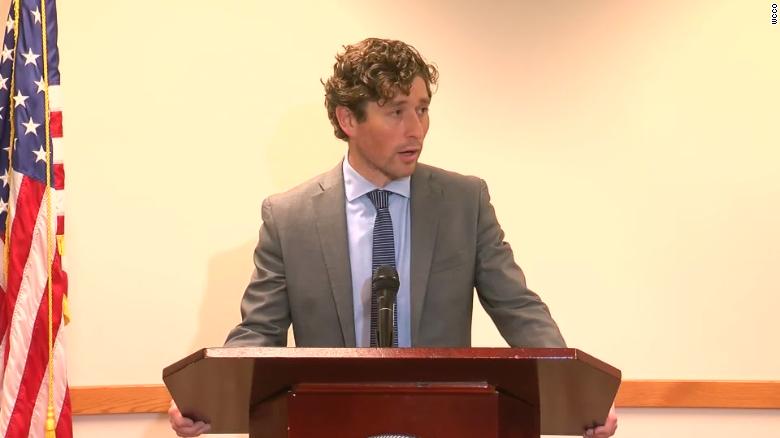 Minneapolis Mayor Jacob Frey called the firing of the officers “the right decision for our city.”Mayor Jacob Frey has said the technique used to pin George Floyd’s head to the ground was against department regulations.After several minutes of pleading with an officer pressing a knee to the back of his neck, the man appeared motionless, his eyes shut, his head against the pavement. Frey, speaking during a town hall streamed on Facebook, said the officer had no reason to employ the hold on the man’s neck. “The technique that was used is not permitted; is not a technique that our officers get trained in on,” he said. “And our chief has been very clear on that piece. There is no reason to apply that kind of pressure with a knee to someone’s neck.” The video shows two officers by the man on the ground — one of them with his knee over the back of the man’s neck. The video did not capture what led up to the arrest or what police described as the man resisting arrest.”Please, I can’t breathe,” the man said, screaming for several minutes before he became silent. Bystanders urged the officer to release the man from his hold. Civil rights attorney Benjamin Crump, in a statement, identified the man as Floyd and said he was representing his family. The mayor also identified him on Twitter. “We all watched the horrific death of George Floyd on video as witnesses begged the police officer to take him into the police car and get off his neck,” Crump said. “This abusive, excessive and inhumane use of force cost the life of a man who was being detained by the police for questioning about a non-violent charge.”Floyd’s cause and manner of death remains pending and is being investigated by local, state and federal law enforcement, the Hennepin County Medical Examiner’s Office said in a statement.Minnesota Sen. Amy Klobuchar via Twitter called the incident “yet another horrifying and gutwrenching instance of an African American man dying.” Frey on Tuesday offered his condolences to the man’s family, adding that “what we saw was horrible, completely and utterly messed up.””For five minutes, we watched as a white officer pressed his knee to the neck of a black man,” Frey told reporters. “When you hear someone calling for help, you are supposed to help. This officer failed in the most basic human sense. What happened on Chicago and 38th this last night is simply awful. It was traumatic and it serves as a clear reminder of just how far we have to go.””Being black in America,” Frey said, should not be “a death sentence.” The Police Officers Federation of Minneapolis said in a statement the officers were cooperating in the investigation. “Now is not the time rush to (judgment) and immediately condemn our officers,” the statement said. “Officers’ actions and training protocol will be carefully examined after the officers have provided their statements.”In a Facebook video posted Monday, bystanders urged the officer to get off the man. Two officers handled the man on the ground while another stood nearby with his eyes on the bystanders as traffic passed in the background. 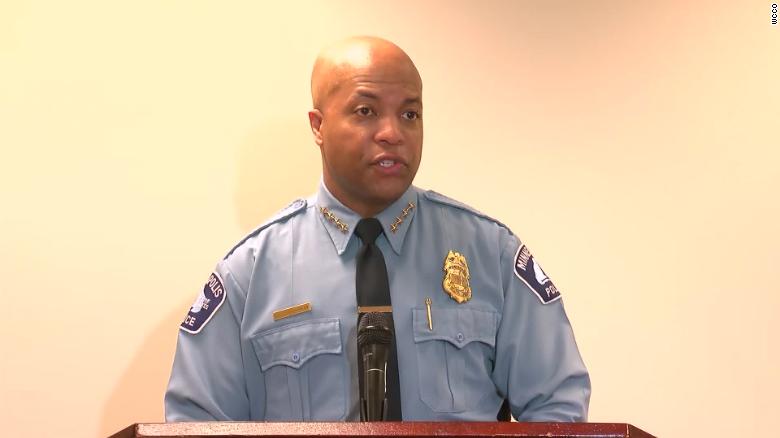 Minneapolis Police Chief Medaria Arradondo says the officers involved have been placed on leave.”My stomach hurts,” the man told the officer. “My neck hurts. Everything hurts.” At one point the man said, “Give me some water or something. Please. Please.” “His nose is bleeding,” a woman said of the man.”He’s not even resisting arrest,” one man said. “He’s not responding right now, bro.”Frey said he understood the anger in the community but reminded potential protesters that “there is another danger out there right now which is Covid-19.” “We need to make sure that everyone that is protesting and that is voicing their opinion stays safe and their families are protected as well,” he said. “So please, practice safe distancing, please use a mask.”Minnesota Gov. Tim Walz tweeted Tuesday, “The lack of humanity in this disturbing video is sickening. We will get answers and seek justice.” St. Paul, Minnesota, Mayor Melvin Carter called the video of the incident “one of the most vile and heartbreaking images I’ve ever seen.””The officer who stood guard is just as responsible as his partner; both must be held fully accountable,” Carter tweeted. “This must stop now.”Paige Fernandez, policing policy adviser for the ACLU, said the incident recalled the 2014 New York death of Eric Garner, who repeated “I can’t breathe” several times after a police officer held him in a chokehold. Garner died during the arrest, the incident also caught on video. “Even in places like Minneapolis, where chokeholds are technically banned, Black people are targeted by the police for low-level offenses and are subjected to unreasonable, unnecessary violence,” Fernandez said in a statement. “Make no mistake: George Floyd should be alive today. The officers responsible must be held accountable.”Body worn cameras were activated during the incident, police said.