by The Lagos Today
in Headlines, World News
5 min read
0
0 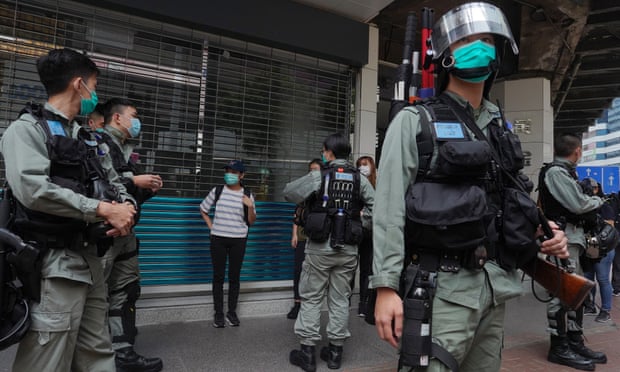 Hong Kong police arrested at least 300 people during day-long protests and skirmishes across the city, as residents railed against controversial legislation aimed at bringing the territory further under Beijing’s control.

Police fired pepper-spray bullets into lunchtime crowds as people shouted slogans. Officers stopped and searched residents, including students, and rounded up suspected protesters, forcing them to sit in rows on the ground.

Thousands of armed police had flooded the streets to stop the planned demonstrations aimed at halting a law criminalising ridicule of China’s national anthem. The protests have been given a fresh urgency with Beijing announcing last week plans to force a sweeping anti-sedition law on Hong Kong.

Roads around the Legislative Council building (LegCo), where lawmakers were holding a debate on the anthem law, were blocked off and pedestrian walkways open to only those with work passes. Nearby shops were also closed.

Police in riot gear stopped and searched mainly young people outside Hong Kong’s MTR railway stations during morning rush hour and lined walkways as commuters shuffled past, prompting accusations on social media that the city had become “a police state”.

Protest organisers on social media urged people to “be water” and keep moving throughout the city, but acknowledged it would be difficult to stop the anthem debate without high risk of arrest. “But you can at least make a statement,” said one post.

Crowds regrouped from lunchtime. People including school children were detained in Mong Kok, with at least 180 arrested in Causeway Bay for an unauthorised gatherings and protesters repeatedly charged at in Central and fired at with pepper-spray rounds.

Police accused protesters of setting fire to debris and throwing objects at officers and said they had arrested several young people for possession of weapons, including petrol bombs.

“Police had no other option and needed to employ minimal force, including pepper balls to prevent the relevant illegal and violent behaviour,” the force said.

The crowds remained, swearing at police and chanting: “Hong Hong independence, it’s the only way.”

“I’ve come for something I care deeply about – ultimately it’s freedom,” said a 40-year-old lawyer who wished to remain anonymous, citing the national security laws, Beijing encroachment, and a recent report clearing police of wrongdoing. “If we keep quiet, they can get away with it. I don’t think we can change things but need to make sure our voices are heard.”

Shortly before midday, crowds led by the former legislator Leung Kwok-hung gathered at Admiralty station, near LegCo, where they were told by police to leave. Protesters shouted back at police to “be Hongkongers”.

“Of course I need to make my voice heard. They’re forcing this upon us and we can’t fight against them,” said Mrs Lam, 74.

A 73-year-old woman who gave the surname Cheung said she swam to Hong Kong from China to “escape the dictatorial rule of the CCP [Chinese Communist party]” when she was 15. “The Communist party is not trustworthy,” she said. “When they say you’re guilty then you’re guilty. Is there still ‘one country, two systems’? Of course we need to fight.”

A district councillor, Roy Tam, said police had pointed pepper-spray at him. “Police use force to intimidate people to disperse gatherings,” he said. “Freedom of assembly has gone.”

Opponents say the anthem law could be weaponised against pro-democracy activists and legislators. Under the proposed law “intent to insult” the anthem, such as by changing lyrics or music or singing in a “disrespectful way”, carries financial penalties and jail of up to three years.

The March of the Volunteers is the national anthem of the People’s Republic of China, as well as Hong Kong and Macau. Booing of the anthem at Hong Kong football marches has previously embarrassed Beijing.

Macau enacted an anthem law in January 2019, but Hong Kong’s stalled amid political gridlock which later descended to violence. The government said it had a constitutional responsibility to enact the law quickly, and has declared it a priority.

It has denied the bill would suppress freedom of speech, and said an offence would occur only if someone expressed their views by publicly and intentionally insulted the national anthem.

Several days have been set aside for debate, and the vote is scheduled for 4 June – the anniversary of the Tiananmen Square massacre and another source of controversy given Hong Kong’s vigil this year will not be allowed.

Thousands joined an unauthorised protest on Sunday against both the anthem bill and Beijing’s plan to impose national security laws, which was quickly cracked down on by police.

The protests come a day before the National People’s Congress, China’s rubber-stamp parliament, is expected to approve the plan to bypass Hong Kong’s legislature to impose a national security law on the city, where similar legislation was shelved after it caused mass protests in 2003.

Hong Kong media reported on Wednesday that Beijing had expanded the scope of the draft security law legislation to target organisations as well as individuals, according to the public broadcaster RTHK and the South China Morning Post..

The US president, Donald Trump, on Tuesday warned he would take action against China if it imposed the laws. Trump did not say if it involved sanctions or changes to the city’s special trading status but his press secretary, Kayleigh McEnany, said he was “displeased”, and it was “hard to see how Hong Kong can remain a financial hub if China takes over”.

Taiwan’s president, Tsai Ing-wen, has said her government would come up with measures to help Hong Kong residents, fearing for their safety under the new law, relocate to Taiwan.

A Chinese foreign ministry spokesman, Zhao Lijian, said on Wednesday afternoon that his country would take “all necessary countermeasures” against foreign interference.

The commander of the People’s Liberation Army garrison in Hong Kong said earlier this week his troops – estimated to number around 10,000 – stood ready to “safeguard” Chinese sovereignty and support national security laws.