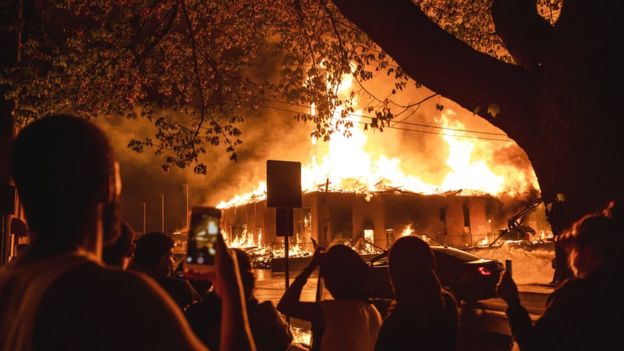 A police station in Minneapolis has been set alight during a third night of protests over the death of an unarmed black man in custody on Monday.

A police officer was filmed kneeling on the neck of George Floyd, 46, despite him saying he could not breathe.

President Donald Trump said “thugs” were dishonouring his memory and called on the National Guard to restore order.

Twitter accused Mr Trump of glorifying violence in a post that said: “When the looting starts, the shooting starts.”

Mr Floyd’s family have demanded that the four police officers implicated in his death face murder charges. Prosecutors have said they are still gathering evidence.

The incident has added to longstanding anger over the police killings of black Americans, including the recent case of Breonna Taylor in Kentucky.

A CNN journalist, Omar Jimenez, and his camera crew were arrested by Minnesota state police officers on Friday morning, reportedly because they did not move on when instructed.

There have also been demonstrations in other US cities, including New York, Los Angeles, Chicago, Denver, Phoenix and Memphis.

He said the looting, vandalism and arson of a night earlier had resulted in damage to many businesses, including ones owned by minorities.

Minneapolis Mayor Jacob Frey called on Wednesday for criminal charges against the policeman who was filmed pinning down Mr Floyd. Four police officers involved in the arrest have already been fired.

The incident echoes the case of Eric Garner, who was placed in a police chokehold in New York in 2014. His death became a rallying cry against police brutality and a catalyst in the Black Lives Matter movement.

How have the protests unfolded?

They began in the afternoon on Tuesday, when hundreds of people came to the intersection where the incident had taken place.

Organisers tried to keep the protest peaceful and maintain coronavirus social distancing, with demonstrators chanting “I can’t breathe” and “it could’ve been me”.

During the second night of demonstrations on Wednesday, the crowd grew into the thousands, with protesters pelting rocks and some throwing tear-gas canisters back at police.

There was a standoff outside the police station where officers formed a human barricade to prevent protesters gaining entry.

What is the latest in Minneapolis?

The last few days have seen buildings in Minneapolis burned to the ground or looted.

On Thursday, protesters gathered outside the police department’s 3rd Precinct, which is near where Mr Floyd died and has been the epicentre of the unrest.

Officers fired tear gas and rubber bullets in an attempt to disperse the crowd. But the cordon around the police station was eventually breached by protesters, who set fire to it and two other nearby buildings as the officers withdrew.

The police department said the 3rd Precinct was evacuated shortly after 22:00 “in the interest of the safety of our personnel”.

Later, the city government tweeted that it had heard “unconfirmed reports that gas lines to the 3rd Precinct have been cut and other explosives materials are in the building”. It urged people near the building to retreat for their own safety.

Minneapolis Mayor Jacob Frey said there had been no choice but to evacuate the police station, adding: “The symbolism of a building cannot outweigh the importance of life, of our officers or the public.”

Mr Frey called the rioting and looting “unacceptable”, but he added that he and everyone else recognised there was “a lot of pain and anger” in the city.

He spoke after a tweet from President Donald Trump blamed Thursday’s violence on a “lack of leadership” in Minneapolis and warned that he would send in the National Guard and “get the job done right” if Mr Frey failed to restore order.

National Guard personnel are normally under state control, although they can be put under federal control in emergencies.

Mr Trump also tweeted: “Any difficulty and we will assume control but, when the looting starts, the shooting starts.”

Twitter placed a “public interest notice” on the message, saying it “violates our policies regarding the glorification of violence based on the historical context of the last line, its connection to violence, and the risk it could inspire similar actions today”.

Twitter flagged two of the president’s posts as potentially misleading earlier this week, prompting him to issue an executive order seeking to limit the legal immunity of social media firms.

Before the police station was set ablaze, Minnesota Governor Tim Walz had activated the state’s National Guard troops at the request of the mayors of Minneapolis and the neighbouring city of St Paul, declaring the situation a “peacetime emergency”.

He said the looting, vandalism and arson of Wednesday night had resulted in damage to many businesses, including ones owned by minorities.

“George Floyd’s death should lead to justice and systemic change, not more death and destruction,” he said in a statement, calling on all protests to remain peaceful.

Mayor Frey called on Wednesday for criminal charges to filed against the policeman who was filmed pinning down Mr Floyd. The officer and three others involved in the arrest have already been fired.

Mr Floyd’s brother, Philonise, told CNN on Thursday: “I’m never gonna get my brother back,” he said. “We need justice.”

Speaking through tears, he said the officers who “executed my brother in broad daylight” must be arrested and that he was “tired of seeing black men die”.

She called for protesters to act peacefully, and for police to “take utmost care not to inflame the current situation even more”.

A number of celebrities and athletes, including John Boyega, LeBron James, Beyonce, and Justin Bieber, have also expressed outrage over the incident.

The incident echoes the case of Eric Garner, who was placed in a police chokehold in New York in 2014. His death became a rallying cry against police brutality and a catalyst in the Black Lives Matter movement.

Where else have there been protests?

People also took to the streets in St Paul on Thursday, where police said multiple fires had been reported.

There were also chaotic scenes during rallies in Denver, Colorado and in Columbus, Ohio.

The statehouse in Denver was put under a lockdown after gunfire was heard, while in Columbus demonstrators reportedly broke some of the statehouse’s windows before being dispersed by police.

Seven people were also shot in Louisville, Kentucky, at a protest over the death of Breonna Taylor, who was shot by three white police officers in March.

What happened to George Floyd?

Officers responding to reports of the use of counterfeit money approached Mr Floyd in his vehicle on Monday.

According to police, he was told to step away from the car, physically resisted officers and was handcuffed. The police statement noted his apparent “medical distress”.

Video of the incident does not show how the confrontation started.

A white officer can be seen using his knee to pin Mr Floyd to the ground by the neck as Mr Floyd groans “please, I can’t breathe” and “don’t kill me”.

Local media have named Mr Chauvin as the officer seen with his knee on Mr Floyd’s neck.

The Minneapolis Police Officers Federation said the officers were co-operating with the investigation. In a statement to local media, the union said “now is not the time to rush to judgment”.

“We must review all video. We must wait for the medical examiner’s report.”