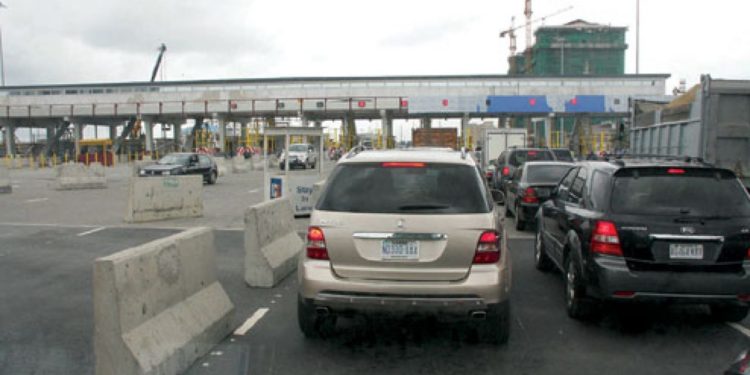 Tragedy struck yesterday night, leaving one person dead after car went on a collision course with a hit-and-run truck at Ikota, along Lekki-Epe Expressway area of Lagos State.
As gathered, the wine colour Toyota Corolla car with registration number FJK 353 GC, was hit from behind while on motion by an unidentified hit-and-run lorry.
The car was said to have rammed into a roadside culvert from impact of the collision when the truck hit it from behind.
Sadly, there was death of the adult, male driver/owner and the critical injuries sustained by the other two adult males, were attributed to the resultant impact of the collision on the car when it was rammed from behind by truck into the culvert.
According to an eyewitness, realising the impact of the hit and having feared that the people in the car might not survive, the unidentified truck driver fled the scene immediately the incident occured.
Before the arrival of the state government’s responders to the scene, sympathisers had rushed the victims – two adult males to the hospital, while dead driver was trapped in the car.
The car has been taken to a nearby layby, while the fatality has been extricated with the aid of the Light Rescue Equipments and bagged by the LASEMA response team, and to be handed over to the appropriate agency that will transfer the corpse to the morgue.
To curtail any possible secondary incident, the vehicle has been recovered from the scene by Lagos State Emergency Management Agency, LASEMA’s response team.
In another development, a midnight fire razed down property and goods worth billions of naira at Olaleye market in Shomolu axis of the state.
LASEMA’s Fire Unit and officers of the Federal Fire Service were seen battling the inferno which raged uncontrollably at the market in Shomolu, Bariga area. Efforts were intensified men the to curtail its spread to proximal buildings.

A few traders and residents of the area wailed as the goods went up in flames.
Though no life was lost to the inferno, nor were injuries sustained, however, the goods lost are unquantifiable.
The Head of LASEMA’s Public Affairs, Miss Okunbor confirmed the two incidents and told our correspondent that: “LASEMA Response Team received a distress call from control room as regards a fire outbreak at the aforementioned location and immediately deployed to the incident scene
“Upon arrival at the scene, it was discovered that Olaleye Market located at Shomolu was gutted by fire.
“However investigation is currently ongoing to ascertain cause of fire.
“Lagos State Fire Service, LRU fire and the Federal Fire Service are currently battling the inferno and preventing it from spreading to other residential buildings
“No life was lost and no injuries sustained, but properties and goods worth several billions of naira is currently being razed down by the inferno”