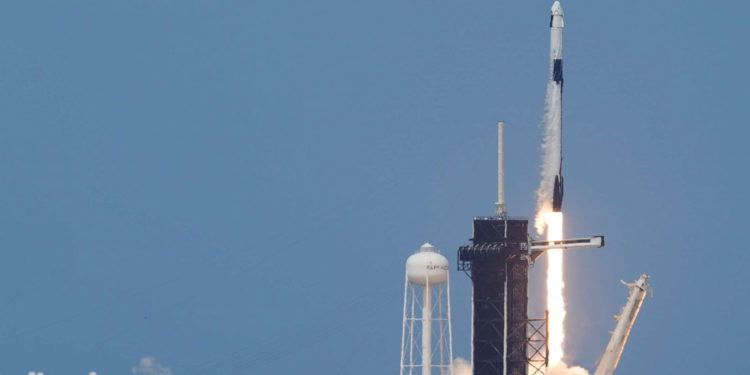 Weather scuppered a previous launch attempt, and could have again been an issue in Florida.

An enormous success for SpaceX

As astronomer Jonathan McDowell notes, this is an extraordinary achievement for SpaceX – a company which in 14 years has gone from a failed launch to successfully flying a manned space mission. 20:33

On the left, the second stage of the rocket taking the astronauts into orbit.

On the right, the first stage of the Falcon 9 which is aiming to land on a barge in the Atlantic Ocean. 20:28

The terminal countdown has begun! 20:12

We’re ten minutes away from launch now. Wednesday’s attempt didn’t get this far.

20:05 How will the astronauts get back from the International Space Station?

SpaceX has published another helpful video explaining how the pair will return from space.

The clouds from the Falcon 9, that is. They are clouds rather than smoke – this is the humid Florida air reacting to the cold liquid being used to chill the rocket’s plumbing before it is loaded with liquid oxygen. 20:02

Just 20 minutes to go now until the first ever manned SpaceX launch and the first launch of astronauts from American soil in almost a decade.

Here is the Falcon 9 upright on the launchpad across the lagoons of Cape Canaveral.

Just five minutes later than this in the launch sequence on Wednesday, NASA confirmed the launch would be scrubbed with ominous clouds all around the cape. That is not what the sky looks like today. 19:57

SpaceX has published a lovely infographic showing its launch and landing sequence for today’s mission. 19:55 19:52

Just half an hour to go until launch. The weather is looking much better and the propellant is being loaded. 19:48

Reports on the ground suggest that Air Force 2 has landed at the Space Shuttle Landing Facility. 19:42

Air Force 2, which is how the US Vice President Mike Pence and his wife Karen Pence are travelling, earlier arrived at Cape Canaveral Air Force Station for the launch of the Falcon 9. 19:39

Great news, although this doesn’t mean that mission control can stop monitoring the weather – both at the launch site and through the abort corridor over the Atlantic.

The crew access arm is now retracting away from the Crew Dragon. 19:34

“I am so proud of what we’re doing to day,” said former astronaut Leland Melvin, who is providing commentary on NASA’s broadcast today and on Wednesday, when he offered this observation.

“When I first went to space I thought my primary task of installing the Columbus Laboratory would be my ‘ah-ha’ moment,” said Melvin, who served aboard two space shuttle missions.

“But it was when Peggy Whitson invited us over to the Russian segment to have a meal.

“She said ‘You guys have the re-hydrated vegetables, we’ll have the meat.’ and we’re doing this – having this meal – and it’s with African-American, Asian American, French, German, Russian – the first female commander – breaking bread at 17,500 miles per hour, going around the planet every 90 minutes.

“I think that’s what spaceflight does for us. The more people that have the opportunity to go to space will feel like it’s an international family of people working together for the good of humanity and all humankind.” 19:31

Things are starting to pick-up now.

The weather is observably better than it was on Wednesday, and the decision to load the rocket fuel is a sign of confidence on the part of mission control.

We’re exactly an hour away from lift-off now.

Another weather briefing is due imminently, and a decision based on that will come in 15 minutes time.

The final call on whether to launch could be made as little as five seconds before launch. 19:15

Major Tim Peake: No visibility of spacecraft from UK tonight

British astronaut Tim Peake notes that the International Space Station will be visible as it passes over the UK tonight at 10.10, roughly an hour and half after the SpaceX launch.

Unfortunately, he says the SpaceX Crew Dragon itself won’t be visible, as it would have been on Wednesday.

The sky will be too light to show it following about five minutes behind the ISS. 19:11

The astronauts are safely inside the Crew Dragon

Outside there are glimpses of blue in a cloudy sky. There next big weather check will be at T-45, just before the SpaceX crew begins to load the propellant into the Falcon 9.

There will be a weather briefing an hour before launch at T-60, in roughly ten minutes time. 19:08

President Trump flew down to Florida to watch the launch on Wednesday, which if it had gone ahead would have made him the first president since Bill Clinton to watch one in person.

Obama had flown down for a space shuttle launch, according to Space News writer Jeff Foust. However that launch was scrubbed due to a technical problem, and he didn’t return for the rescheduled launch.

Trump has indeed set off from Washington again amid a series of growing crises in the US, from the coronavirus pandemic to the death of George Floyd. 18:57

How did SpaceX get involved?

NASA launched its Commercial Crew Program in 2010 to find private sector partners who could launch astronauts safely to the ISS, but funding issues delayed the initial launches.

Russian space launches themselves aren’t cheap – for astronauts travelling to the ISS using Soyuz rockets from the Baikonur Cosmodrome in Kazakhstan it costs up to $86m (£70m) per seat.

Today’s launch is the final demonstration which would prove SpaceX is capable of safely transporting astronauts into low-Earth orbit. 18:55

Why hasn’t NASA launched an astronaut from the US since 2011?

For the first time in almost a decade, NASA is going to launch US astronauts to the International Space Station from American soil.

The last time this took place was in July, 2011, before the retirement of the space shuttle.

From its first flight in 1981, the Space Shuttle programme launched 135 times – 133 of which were successful.

The tragic failures of both the Challenger and Columbia orbiters, in 1986 and 2003 respectively, led to the deaths of 14 astronauts – all seven crew members on each mission.

At the time of the retirement of the Space Shuttle, NASA stated it was devoting its resources to sending astronauts back to the moon – and one day to Mars.

Since then NASA has relied on Russian Soyuz spacecraft, operated by Russia’s space agency Roscosmos, to ferry its astronauts to the ISS. 18:48

According to a briefing to journalists yesterday, the US Air Force 45th Weather Squadron – which monitors the weather for all space operations in the US – explained that launch control can make a decision on the weather as late as five seconds before liftoff. 18:44

Weather currently a no-go, according to mission control, but there is an expectation it will clear up. 18:42

Who are the astronauts?

Robert Behken (left) and Douglas Hurley are the astronauts who will be aboard the SpaceX Crew Dragon capsule when it launches on Wednesday.

Both men are experienced astronauts and engineers who joined NASA after achieving the rank of colonel as military pilots, but their lives and careers have mirrored each other’s for almost two decades.

They were both selected as astronauts in 2000, and both of them met their wives – who are also astronauts part of NASA’s class of 2000 – while undergoing training.

Behken’s wife, Megan McArthur, is an oceanographer and NASA astronaut who has flown one space shuttle mission. She is currently the deputy chief of NASA’s Astronaut Office

Hurley’s wife, Karen Nyberg, is a mechanical engineer and was a NASA astronaut who completed two space missions before recently retiring.

Doug and Bob as they are almost always referred to are close friends and they attended each other’s weddings. They also both have sons and have trained together for this mission for five years. 18:41

Today’s launch is the first manned mission to take off from US soil since the space shuttle was retired in 2011, but NASA hasn’t forgotten how to get it done.

Every move from now until the Crew Dragon spacecraft reaches the International Space Station has been precisely choreographed.

Ominous clouds over the launchpad

There’s a joke in Florida: “If you don’t like our weather, come back in 10 minutes.”

Waiting for the weather to clear up

It’s raining in Florida at the moment, which will prevent the launch unless it clears up.

The US Air Force’s 45th Weather Squadron, which monitors the weather for air and space operations, now says there is a 50% chance the weather will be good enough for today’s launch.
18:30