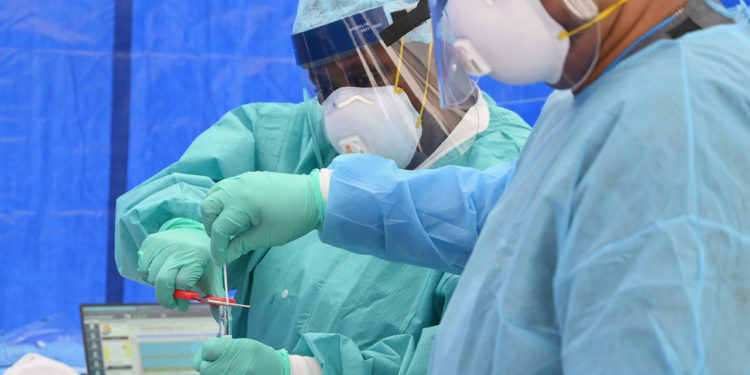 Lagos Today gathered that the cumulative total number of coronavirus infections in Nigeria topped 10,000, the third highest in Africa—after South Africa and Egypt.

NCDC Director-General, Chikwe Ihekweazu said this at the ongoing Ministerial briefing of the Presidential Task Force on Covid-19.

“The 812 infected health workers on the frontline of response to the pandemic are not just numbers.

“Twenty-nine of these people work with the NCDC. They are people I know; they have families, wives, children.

“When you engage with these people, it means a lot more to you than just the numbers. As we report on this every day, let’s remember that these are people; every single number there represents an individual.” He assured that as the lockdown easing continues, the centre will further strengthen the public health response.

“So, I really wanted to just spend today to reflect on some numbers with you because crossing that 10,000 mark was quite a significant event, I won’t call it milestone and every night when we work very hard to bring out those numbers, sometimes numbers begin to feel like what they are. You forget that there are people behind each number.

“The second thing I would like to say is something around the provenance of those numbers. So we have reported since the beginning of the outbreak on the likely exposure, right now cumulatively just two percent of cases have a travel history, in the beginning there used to be 80 to 90 percent, at some point it was 100 percent when everybody came back from some country or the other.

“So these are people that have been found through the public health response, their contacts are there where you test some contacts you find more cases at the moment” He said.

The DG said that at the moment, 75 percent of people have an unknown source of their illness and that what this really means is that community transmission is happening.

“It means that you cannot link your exposure to one particular person or one event. And this is normal, of a respiratory virus for which 80 percent of people are asymptomatic. But what it does not constitute is fraud. So for a newspaper to present this figures as fraud is irresponsible journalism at the very least.

“We have been very proactive in making sure every Nigerian is informed, the team works very hard every day. We come here to represent to tell you what these numbers are.

“So at least we expect responsible reporting of what these numbers mean and at least check with other countries what proportion in the US, In Japan, in China during committee transmission.

“Can you identify a known source for? Our percentages are no different than reported anywhere else in the world. So how does this represent fraud? So we need to really understand what these numbers mean?”

“We have had 299 deaths so far representing a case fatality ratio of about three percent, now each of those days that are very painful and we report them because it is important to count these things.

“But also we always remember and the SGF of our said is here severally these are people some of them we know and so many and privilege position have come to know through the course of their illness. So we know them and we remember them every time we go out in the morning to work harder the next day.

“We now have the second highest number of confirmed cases on the continent just after South Africa and Egypt. It means that there is an added responsibility for us to work harder every day,” he said.

The NCDC boss said the centre has increased the testing capacity and has now tested over 65,000 samples and increase the lab network to 30 having activated a lab in Bauchi and a new one in Abuja.

“And each of these are not numbers. There is a lot of work behind every new lab activated means equipment have been procured, people have been trained, people have travelled to make sure these things happen, state governments have invested.

“So when you just hear a new lab activated, it’s not just a number. It represents the collective efforts of a country trying to respond to Public Health Emergency.

“So this will now define our response even further, out of 774 local government If we have 60 percent of cases in 20 local governments in these are we will focus a lot of our efforts on those 20 while not forgetting that we need to prevent spread to others,” Ihekweazu said.

“We have distributed over 40,000 pieces of complete PPEs and we continue to do this by this weekend a new consignment will be going out to every state every FMC in the country. So they are not numbers. These are life-saving commodities” He said.