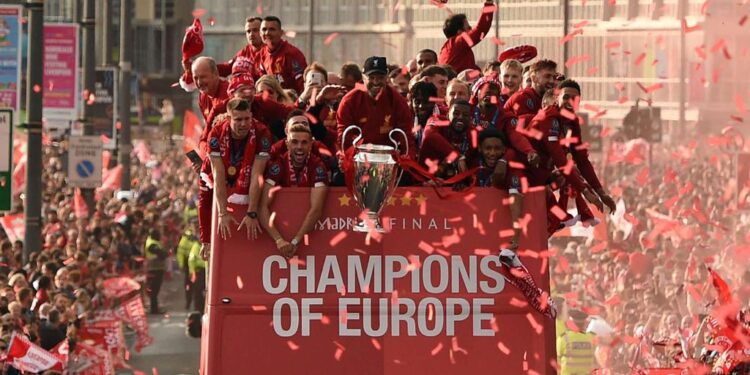 Liverpool football club of England have emerged champions of the English Premier League after 30 long years of trying, the feat was made possible last Thursday night after the game between the outgoing champions, Manchester City and Chelsea ended in a 2 -1 win in favor of Chelsea at the Stamford bridge, home of Chelsea. The Chelsea win ensured that it was no longer mathematically possible for the Manchester side to catch Liverpool who already has 86 points from 31 games winning 28 games so far. Two draws and a very surprising one-time loss to league strugglers Watford as against Manchester City’s 63 points with 7 games to spare, a new record in the English game.

The Merseyside giant broke a couple of premier league records on their way to the title like the record for best start to a premier league season by any team, the records for the biggest lead at the top of the EPL table, the record for the most point accumulated after 38 games played and the record for the most consecutive home wins and they still have their sight on making even further records like Most home wins in a season, most victories in a season, most away wins in a season and the biggest win margin which stand at 23 point margin at the moment and they have the capacity to rake in even more points starting from their next fixture this weekend against the dethroned champions Manchester City.

THE KLOPP EFFECT
The German tactician arrived Liverpool on the 8th of October 2015 after having a successful managerial spells in with Mainz 05 and Borussia Dortmund. His first game in charge ended in a goalless draw against Tottenham Hotspur and he has gone on to make Liverpool a force to reckon with again both at home and in Europe. He managed a 8th place finish in his 1st season in charge in the 2015/2016 season, followed by a 4th place finish in the following season in 2016/2017, he managed another 4th place finish in the 2017/2018 season and in that same season he led his team to a champions league final loss to Real Madrid after two school boy goal keeping blunders from the then Champions League Liverpool Goal-keeper KARIUS.

Jürgen Klopp’s team got better the following season, 2018/2019 season with important acquisition of players in the likes of the gangling ever reliable Dutch defender Virgil Van Dijk who he signed from the fellow EPL side Southampton for a whopping £75,000,000 and another very important signing in the Brazilian International goal keeper from Italian side Roma for £65,000,000 and he went on to win the UEFA Champions league at an all English team final vs. Tottenham Hotspur, but could only manage a 2nd place finish in the league. Fast forward to this season he started on a flying note with the best ever start by an English team in the league going past teams and a very good run of form in the process.

His very attacking formation of a front 3 in person of the African duo of Sadio Mane and Mohammed Salah and Roberto Firmino is always a joy to watch as they usually press teams backwards with their high level pressing style and quick counter attacking format which is usually characterized by their off the ball runs and interchange of positions which makes it difficult for opposing defenders to defend. Usually Roberto Firmino is made to fall deep in between the lines in front the center backs and he tries to drag center backs to himself when he is on the ball and thereby creating space in the already disrupted opposition defense line which would afford space to run into for either of Mane or Salah, Klopp’s full backs attacking mentality is always a very good attacking outlet for his Liverpool team as well as the duo of Robertson and Trent Alexander Arnold are willing runners and always peg back the opposition full back. In all, it is also important to mention that Klopp has been active in the transfer market and he has spent close to 500 million pounds in total in transfer on players in his last 4 and a half season in charge of Liverpool.

Liverpool would get a guard of honor when they walk out of the tunnel at the Etihad stadium during their next match when they face the cityzens at home and the long 30 years wait to lift an EPL trophy would come to an end when they get to be presented their EPL trophy at their last home game on their home ground at the very prestigious Anfield stadium after their last home game of the season against Chelsea on 18th July, but it seem there would be walking alone on this one as they won’t get a chance to lift the cup in front of their very loyal fans as matches have been played behind closed doors without the fans in the wake of the COVID-19 pandemic since the re-start of the league after a long three months of hibernation.
Here is to wish all Liverpool fans congratulations and I’ll end by saying YOU WILL NEVER WALK ALONE