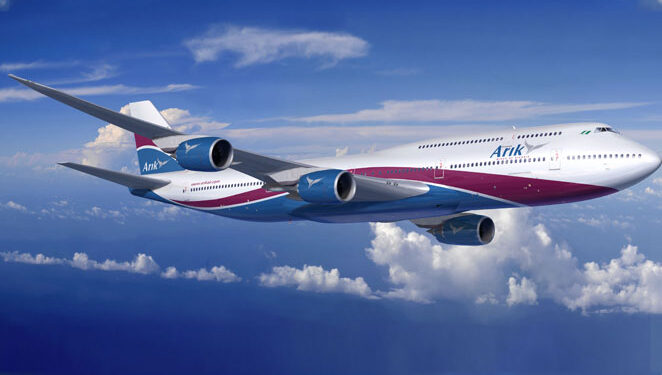 Some domestic airlines, Wednesday, have resumed operations, three months after the COVID-19 lockdown.

At both the GAT Alpha and MM2 terminals in Lagos, observations show that few passengers were seen boarding, while social distancing and other precautionary measures were strictly followed.

As at 6.30 a.m. on Wednesday, Arik Air passengers had started boarding for the first flight from Lagos to Abuja, scheduled to depart at 7 a.m. Passengers observed the COVID-19 preventive screening measures before boarding, although stores within the airport were all locked.

Meanwhile, there has been a significant increase in airfares. The airlines raised their fares in all classes of tickets for one-hour flights from Lagos to Abuja.

Air Peace sold its Economy-Flexi Domestic plan for N33,001 for a one way Lagos-Abuja trip, while the business class ticket was sold for N80,000.

Arik Air’s economy plan was sold for N29,189, while the business class was N78,532 for a one-way Lagos to Abuja trip.
However, one of the airline officials, who preferred anonymity, said that prices of the tickets were driven by extra costs factored into the base fare.

The source said that taxes and other fares increased by the Federal Airports Authority of Nigeria (FAAN) was also responsible for the hike in fares.

He said that Arik Air commenced three daily flight operations from Lagos to Abuja, in the first phase of the aviation restart.
“For us in Arik Air, protection of passengers and cabin crew remains paramount and we have put effective measures to prevent the spread of COVID-19.

“We commend the government at all levels in ensuring effective synergy and support for the aviation sector toward combating the pandemic,”he added.

Chairman of Momas Electricity Meters Manufacturing Company Limited, Mr Kola Balogun, who was boarding to fly with Arik Air, lauded the management of FAAN on the preventive measures put in place at the aiport.

He said “I am highly impressed with the level of compliance and processes I am seeing here today. I commend FAAN for making lives more comfortable and sticking to the social distancing methodology.

Another passenger, an aviation stakeholder, Mr Tayo Ojulari, said that he did not subscribe to leaving the centre seats in the aircraft as directed by the government.

“The cost of operations and FOREX is affecting airlines, reducing passengers capacity to 50 per cent, which is another economic implication for the airlines,” he said.

The Director of Aviation Security of FAAN, Usman Sadiq, said that adequate security measures had been put in place at the airport.
He said the government had also increased the security manpower at the airport for effective measures.
According to him, “There is effective synergy between the various security agencies across airports in the country to tackle the numerous security breach incidents.

“All security agencies are on ground to ensure law and order at the airports, and today, we can see that Nigerians are well behaved from what was demonstrated,” he said.

He also appreciated the management team of FAAN for their support in carrying out their responsibilities.
“I am excited to add that the highest level of the authority’s management, an enviable leadership, commitment and support, has been displayed again and again in an unequivocal manner.

“For this, we are grateful and rededicated to achieving the core mission of developing and profitably managing customer-oriented airport facilities for safe, secure and efficient carriage of passengers and goods at world- class standards of quality,” he said.

It can be recalled that the Federal Government had directed the resumption of domestic flights on July 8, after the March 30 lockdown of the airlines.