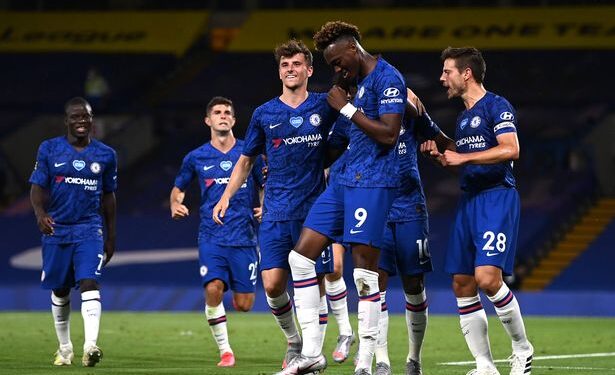 Frank Lampard’s men, Chelsea put up a good show at the Wembley Stadium yesterday as they put Manchester United to the swords in an exciting game which ended 3-1 in favor of the Blues of Chelsea to set up a mouth watering London derby in the finals of the FA cup come 1st August 2020.

United going into this one were adjudged the favorites to come out tops over the rivals from West London as they were coming on the back on 19 games unbeaten in all competitions, the front trio of Anthony Martial, Marcus Rashford and Mason Greenwood been in a rich goal scoring form and the defense ably marshalled by Harry Maguire keeping it tight at the back, and getting the right boost from the mid-field from a formidable new found partnership between Paul Pogba and Bruno Fernandes who has other hand have been blowing hot and cold winning a reasonable amount of crucial matches since the restart and falling at winnable games like the loss to Sheffield United and Westham which came as a surprise to many.

The match started with both sides sizing each other up and not taking too many risk, and a period of prolonged stopages made up most of the 1st half to get attention to the injured Eric Bailey who came out worse from a collision with teammate Harry Maguire. Chelsea got their heads in front with a first goal coming late in the prolonged added period of the 1st half as French Striker Olivier Giroud connected a low cross from the club captain Cesar Azpilicueta’s and he put the ball in David De Gea net to send Chelsea into the lead going into the break.

The second 45 minutes had barely started when Mason Mouth forced a low shot towards De Gea, but the Spaniad goal keeper made one of his characteristic errors by parrying the ball into his own net to the suprise of his defenders. Chelsea relied on counter attacks mostly and soon a forced error from Harry Maguire as he put a cross into his own net beyond his on goalkeeper sealed the afternoon for the blues and the hit summed up a poor afternoon for United. United were later awarded a consolation of some sort as they were awarded their 19th penalty of the season which the united official penalty taker Bruno Fernandes stepped up to take and put the ball into the back of Willy Cabalero in goal for Chelsea.
With the win chelsea would have a chance to win their 9th FA Cup title when they square up against Arsenal on 1st of August at the Wembley Stadium