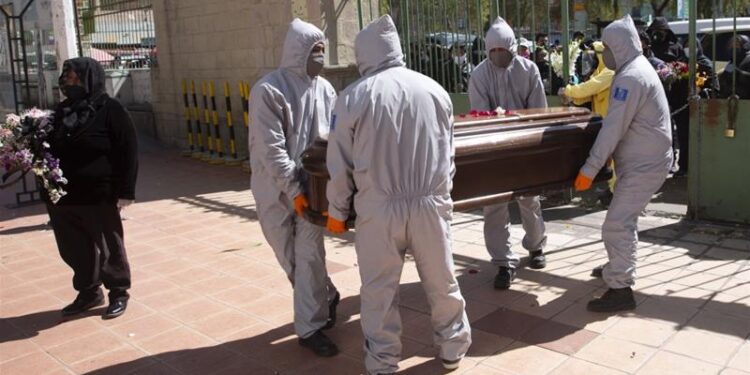 The dead believed to have succumbed to coronavirus recovered from streets and homes in Bolivia’s biggest cities.

Police in Bolivia have recovered more than 400 bodies found in streets, vehicles and homes of some of the country’s biggest cities over a five-day period, with 85 percent of the victims believed to have died from coronavirus.

A total of 191 bodies were collected in the Cochabamba metropolitan area from July 15 to 20, with another 141 recovered in the administrative capital, La Paz, national police director Coronel Ivan Rojas told reporters on Tuesday. In the country’s biggest city, Santa Cruz, authorities recovered 68 bodies.

Some 85 percent of the bodies were “positive cases for COVID-19 and cases with COVID-19 symptoms,” said Rojas, referring to the highly contagious respiratory disease caused by the new coronavirus.

The rest died of “other causes, meaning death from an illness or a violent cause”, he added.

According to the national epidemiological office, the western regions of Cochabamba and La Paz are experiencing a “very rapid increase” in coronavirus cases.

As of Tuesday, officials said Bolivia had recorded 60,991 confirmed coronavirus infections and 2,218 deaths from COVID-19.

Bolivia’s Forensic Investigations Institute said in a statement that between April 1 and July 19, more than 3,000 bodies that were recovered outside of hospital settings had been identified as either confirmed or suspected coronavirus cases.

Meanwhile, in Cochabamba, people have been lining up to buy a bleach-like substance – chlorine dioxide – after the senate approved its use last week to treat coronavirus, despite warnings from the country’s health ministry.

“We have already drawn up a resolution that says this substance is not approved, that it is not suitable for human consumption and that it can have serious consequences,” Rene Sahonero, health ministry adviser, said, adding that cases of chlorine dioxide poisoning had been reported.

Health authorities, including the US Food and Drug Administration, say the bleaching agent is dangerous, can jeopardise the health and should not be purchased or drunk as a medical treatment.

Separately, on Tuesday, a scientific committee advising the Bolivian government proposed that the presidential election scheduled for September 6 be postponed because of the pandemic.

Bolivia is trying to resolve the political crisis that erupted last November when street protests over allegations of election fraud led President Evo Morales to resign after nearly 14 years in power.

‘Send down the rain’ crooner, Majek dies in New York