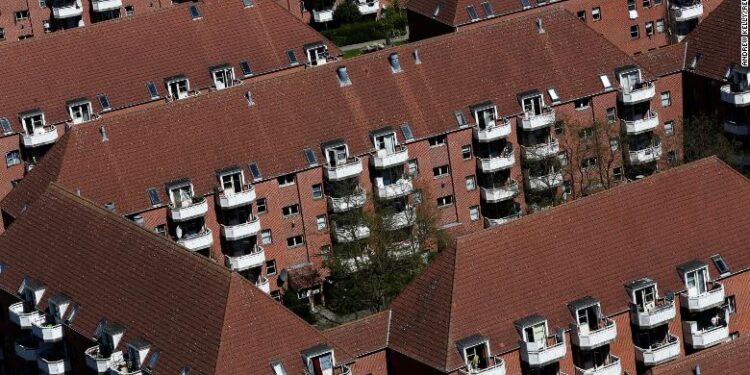 Muhammad Aslam loves his home — an apartment in a low-rise public housing estate at the heart of the diverse and gentrifying Copenhagen neighborhood of Norrebro.

“It has been amazing to live here,” he says, looking around at the Mjolnerparken project, a series of trim, red-brick, rent-controlled blocks set around tidy, green courtyards.

Aslam has lived here happily for 30 years, raising four children — three of whom have since moved out, to pursue careers in law, civil engineering, and psychology. But now the Danish government wants to sell his home, and those of his neighbors.

A new law aims to force changes in 15 housing estates across the country that the government calls “hard ghettos” — which Danish regulations define partly according to the races of those who live in them. The law, which went into effect in July 2019, aims to change the social and ethnic make-up of low-income projects.

The legislation compels housing associations to sell or redevelop 40% of public housing stock in these low-rent, ethnic minority enclaves. According to the housing and transport ministry, residents will be offered the chance to be rehomed in and around the same area. Anyone who refuses to leave will be evicted, according to the ministry.

Experts say no other modern European country has attempted to relocate their citizens in this way. The move, dubbed “the greatest social experiment of this century” by Danish media, has been lambasted by critics for targeting non-White Danes and immigrants.

“The cornerstone of democracy is that we are all equal before the law, but that is the stone they are pushing [away] with this legislation,” said Aslam, whose apartment is in one of two blocks due to be sold. He and 11 other tenants are taking the government to court over the matter.

Eddie Omar Rosenberg Khawaja, the attorney representing the tenants, told CNN the subpoena in the case compares Mjolnerparken with a similar area, Byparken, in the town of Svendborg, west of Copenhagen. He argues that Byparken has roughly the same socio-economic challenges as Mjolnerparken — there’s just one difference: the majority of its residents are White.

“When you make the decisive criteria ethnicity, then you have a problem,” Khawaja said. “Why are they not targeting Svendborg? Because there are more White Danes living there? And that is problematic. It is detached from solving the problem, and you’re linking problems to ethnicity.”

The tough approach is part of the “One Denmark without parallel societies — no ghettos in 2030” plan, which was proposed by the previous center-right government but is now being pushed through by the current left-wing coalition.

Proponents say it is a blunt — but much-needed — tool to deal with high levels of gang violence and unemployment in these areas.

“I support the agreement on parallel society because the initiatives ensure that we have mixed cities in Denmark,” Kaare Dybvad Bek, the country’s housing minister, told CNN in a statement.

“Having mixed cities and residential areas strengthens the cohesion of our welfare society and provides a more equal opportunity for all children and adults,” Dybvad Bek added.

Denmark has a generous welfare state and a reputation for progressive politics, but critics say its liberalism appears to dry up when it comes to immigration and integration.

They see the relocations as the latest salvo against minority groups from Danish lawmakers, who they say have rolled out some of the harshest anti-immigrant policies, including a so-called jewelry bill that allows the government to take certain assets from asylum seekers to contribute to the country’s welfare state.

The thorny question of integration has dominated Danish political debate for the past 20 years, as the country considers its changing demographics.

This once homogenous nation sped up the recruitment of guest workers into the country in the 1960s and 1970s to help meet the demands of its growing economy.

But some maintain that, at its core, Denmark’s identity is tied to its White heritage — something reflected in official statistics, which are split into “persons of Danish origins,” and “descendants of immigrants.”

Attitudes towards immigrants have continued to harden since the historic influx of asylum seekers into Europe during the refugee crisis of 2015.

In 2019 non-western immigrants and descendants of immigrants from non-western countries made up 8.9% of the nation’s 5.8 million population, according to Statistics Denmark.

The word ghetto, which Merriam-Webster defines as “a part of a city in which members of a particular group or race usually live in poor conditions,” is mostly no longer used in mainstream political discourse.

But in 2010, the Danish government made “ghetto” a political-administrative category, according to Kristina Bakkær Simonsen, an associate professor at Aarhus University, who specializes in immigrant integration, discrimination and stigmatization.

According to the government, a “ghetto area” is one where the proportion of immigrants, and non-western descendants, exceed 50%. In order to be classed as a “ghetto,” these areas also need to show two of the following indicators: high unemployment, a conviction rate three times the national average, low income levels, or low education levels. “Hard ghettos” are places which have met those conditions for four or more years.

“The criteria behind the ghetto legislation are discriminatory and based on race,” Khawaja, the attorney representing the Mjolnerparken residents’ lawsuit, told CNN.

The lawsuit, which Aslam is part of, states that the development plan’s approval is discrimination based on race and ethnic origin, and is in dispute with Danish law over the equal treatment of ethnic minorities, according to Khawaja.

Housing minister Dybvad Bek declined to comment on the impending court case to CNN, but said: “The government continues to believe this is important legislation that contributes to a thorough transformation of the most vulnerable residential areas, and with the important goal that everyone — regardless of where they live — must have equal conditions and opportunities in Denmark.”

Some residents of Mjolnerparken CNN spoke to do not deny there are issues of unemployment and crime. But, as Simonsen said: “You can then ask, ‘Is the most sensitive tool to deal with those problems replacing inhabitants and making them live somewhere else?'”

She said there is evidence that people from immigrant backgrounds can benefit from living in ethnic enclaves, which can expose them to economic opportunities and information networks.

Research also suggests that Denmark still has systemic racism issues to overcome. A 2018 peer-reviewed study found that when it comes to job recruitment, there is “considerable discrimination in the hiring process.” Candidates with Danish-sounding names were 52% more likely to get called back compared to those with Middle Eastern-sounding names, according to the study.

A number of stunts and pieces of anti-immigrant legislation have made international headlines in recent years.

The following year, a decade-old proposal by the right-wing populist Danish People’s Party (DPP) to ban face coverings in public came into force, essentially criminalizing Muslim women who wear the niqab or burqa. DPP politician Martin Henriksen described it as an essential step for the country and its values.

And at the end of 2018, the then center-right Danish government struck a deal to move “unwanted” migrants to a remote uninhabited island once used to house contagious animals. Those plans have since been scrapped by the current center-left administration.

While Danish political discourse on immigrants “is extremely negative” when compared to other European countries, Danes are “no more or less” anti-immigrant compared to Germany, France, Netherlands, Norway, or the UK, according to analysis by Simonsen.

Public opinion is divided, with younger, White Danes more comfortable with Denmark becoming a multicultural society. Many came out onto the streets for a recent Black Lives Matter protest that saw more than 15,000 people march through Copenhagen, according to Danish police.

But Aslam said the relocation legislation puts a target on the backs of non-White Danish kids. He says his children could inadvertently tip the scales in any area they choose to live in, “despite being Danish and being born in Denmark,” because they are categorized as the descendants of immigrants.

“[It] would all count against [them],” he said, adding that the real problem is that “as long as we keep marginalizing citizens, we keep widening the divide between us.”

Why Silicon Valley's biggest companies are investing billions in India