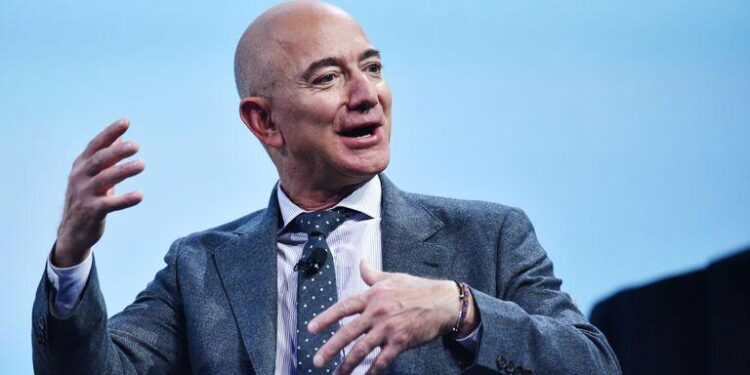 Bezos's wealth rivals the annual economic output of many countries

Despite pledging billions to climate change and $100m to coronavirus food banks, critics still say Bezos should give away more.

Already the world’s richest man by a huge margin, Bezos is now estimated to be worth $189.3bn (£148bn). Sponsored link

The daily jump in the 56-year-old’s wealth is the biggest ever recorded by Bloomberg’s billionaire tracker.

The all-encompassing web giant has reaped the benefit of the coronavirus lockdown as people increasingly avoid shops and buy online.

Bezos famously started his company in his garage in the mid-1990s, rapidly expanding from selling books to establish an online juggernaut that spans the world.

His personal wealth now exceeds the value of huge multinational companies and is roughly on par with the GDP of Iraq – and only about $14bn (£11bn) behind Greece.

She received 4% of the company when they split last year and is estimated by Bloomberg to now be worth $62bn (£48.7bn) – making her the world’s 13th richest person.

A very distant second on the rich list is Microsoft founder Bill Gates with a purported fortune of $118bn (£92.8bn).

Bezos gave $2bn to US charitable causes in 2018, and pledged $10bn to fight climate change earlier this year.

He’s also given $100m to an initiative to help food banks amid the coronavirus crisis.

But critics point out that such donations represent a small fraction of his phenomenal wealth.

They also say he has yet to sign up to the Giving Pledge – a promise signed by his ex-wife and high-profile billionaires such as Gates and Warren Buffett – to give a significant chunk of their money to good causes.