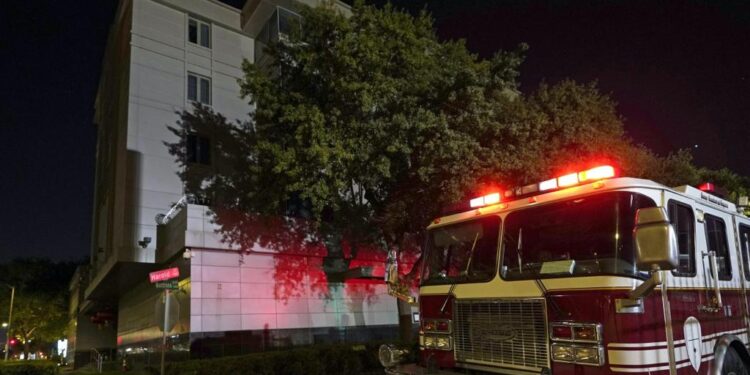 A fire engine outside the Chinese Consulate in Houston

Police say smoke was seen in the courtyard after the consulate was reportedly given a Friday deadline to shut.

China has threatened retaliation after the US ordered its Houston consulate to close – with people later appearing to burn papers outside the building.

Beijing called the decision “outrageous” and warned of tough action if the decision is not reversed. Sponsored link

The US State Department said it was necessary “to protect American intellectual property and Americans’ private information”.

Authorities said they responded to reports of a fire at the consulate on Tuesday night, with social media video and witnesses suggesting papers were being burnt in bins.

Houston police tweeted that smoke was seen in a courtyard area but that officers were not allowed to enter the building.

Staff at the consulate have reportedly been given until 4pm on Friday to leave.

The closure comes amid tensions between China and the US over a range of issues such as Hong Kong’s controversial national security law, the South China Sea dispute, trade, the Uighurs, and the coronavirus outbreak.

The State Department did not go into detail on precise reasons for the closure.

However, spokesperson Morgan Ortagus said the US would “not tolerate the PRC’s (China’s) violations of our sovereignty and intimidation of our people, just as we have not tolerated the PRC’s unfair trade practices, theft of American jobs, and other egregious behaviour”.

China quickly hit back, saying the closure was “an unprecedented escalation of… recent actions against China”.

“We urge the US to immediately revoke this erroneous decision,” said foreign ministry spokesman Wang Wenbin.

“Should it insist on going down this wrong path, China will react with firm countermeasures.”

He also accused the US of “interference, infiltration and confrontation” against Chinese interests and said its Washington embassy had received bomb threats.

America is not the only Western power to be going through choppy diplomatic waters with China.

The UK is halting its Hong Kong extradition treaty over the new security law and has ordered all Huawei technology to be stripped out of the UK’s 5G network.