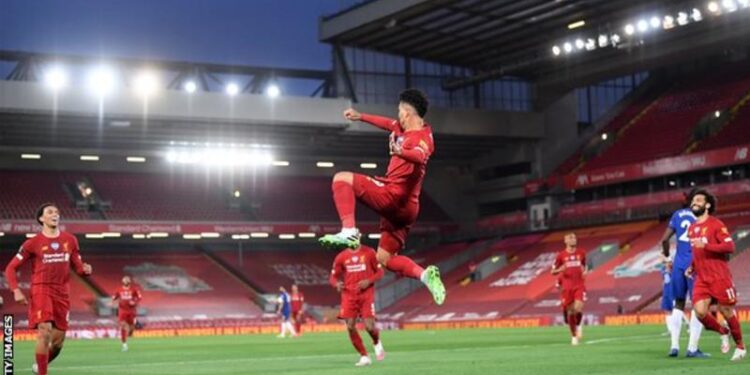 Liverpool celebrated receiving the title trophy for the first time in 30 years in style as the new Premier League champions overcame Chelsea in a thriller at Anfield.

Jordan Henderson – currently out injured – received the trophy from Liverpool legend Sir Kenny Dalglish on a special podium built on the Kop after Jurgen Klopp’s side made it three full unbeaten Premier League seasons at Anfield.

Chelsea, who now need a point from their final game at home to Wolves on Sunday to confirm a place in the top four – and next season’s Champions League – started well.

But Liverpool moved through the gears after Naby Keita broke the deadlock with a rising 25-yard drive, and they added further goals before the break through Trent Alexander-Arnold’s fine free-kick and Gini Wijnaldum’s close-range strike.

Olivier Giroud scrambled in for Chelsea on the stroke of half-time but their hopes of a comeback appeared to be snuffed out 10 minutes after the break, when Roberto Firmino headed in his first Premier League home goal of the season from Alexander-Arnold’s cross.

Chelsea substitute Christian Pulisic then had a dramatic impact as he sparked a Chelsea fightback, creating a goal for Tammy Abraham then scoring another himself on the turn as this entertaining game took an unexpected turn.

To the thunderous sound of fireworks being let off outside Anfield by celebrating fans, the champions pressed forward again and Alex Oxlade-Chamberlain slammed home the fifth from Andy Robertson’s cross with six minutes left.

And then it was time for the ceremony Liverpool have waited three decades to enjoy – albeit conducted in the somewhat surreal surroundings of a virtually empty stadium.

Liverpool irresistible to the end

Liverpool may have secured the title with seven games to go – but there is a relentless quality about the drive and motivation of Klopp’s team.

They showed that against opponents who still needed that crucial point to assure a place in next season’s Champions League.

Chelsea were the better team early on but Liverpool produced one of those spells after the midway point in the first half in which they are simply irresistible.

Liverpool scored three goals and even when Chelsea threatened an unlikely resurgence, they rose to the challenge again to confirm the win through substitute Oxlade-Chamberlain.

Mohamed Salah could have pushed his claims for the Golden Boot but missed several chances – while Keita distinguished himself with a superb strike and excellent performance.

Once again, Liverpool refused to finish second best in a show of character and quality.

It was a fitting way for them to round off another unbeaten league season at Anfield and the perfect set-up for those title presentation celebrations.

Chelsea are left needing that final point at home to Wolves to earn a top-four place as reward for a season of development under manager Frank Lampard.

Here, there were many fine elements to their performance but frailty at the back is never going to escape punishment against a side of Liverpool’s potency.

There was huge cause for optimism with the explosive contribution of Pulisic, who unnerved Liverpool’s defence with his pace and threat.

Wolves represent dangerous opponents in the season’s finale and Lampard will be warning his players that they cannot display the same flaws as they did here.

‘We weren’t that far away’

Chelsea boss Frank Lampard to BBC Sport: “I can respect the quality of the game if you’re a neutral, but when you play against Liverpool and their quality… until the first two goals I thought we were comfortable. We reacted and really contributed to the game. At 4-3 we looked like the one to get a goal.

“I thought we could draw the game because if you take out the isolated incidents of the goals… we weren’t that far away tonight.”

On Christian Pulisic: “He’s got huge quality. He couldn’t play against United because of his injury. He’s getting stronger and he’s going to be a huge player for us.”