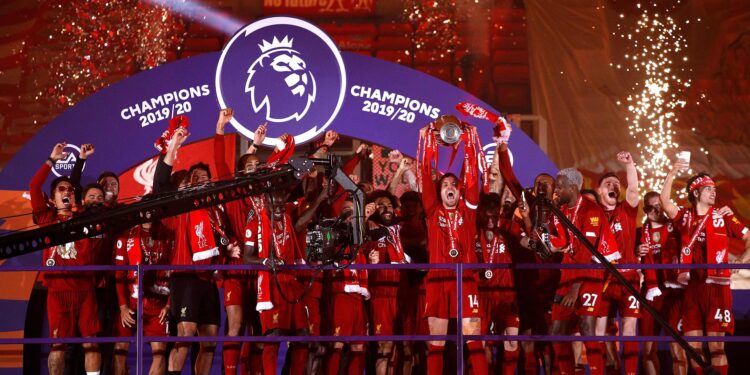 Liverpool, in their last home game, wins against Chelsea. The Jürgen Klopp’s side have seemed to ease their foot off the gas since they were confirmed Champions of English Football on 25th of June. The EPL Champions have dropped 10 points since the restart, a goalless draw against their Merseyside Rivals Everton on the opening fixture of the restart at Godison Park and a home 1 – 1 draw against Burnley. Losses have been recorded against Manchester City and most recently Arsenal at Emirates Stadium have ensured that they don’t reach the 100 points mark set by Manchester City in 2017/2018 Season. However, they have been able to set several records some of which include; clinching the title with most remaining games (7 games), most home points in a season and defeated each team at least once in a season.

In their last home game, Liverpool were billed to be presented their EPL trophy at their last home game against Chelsea in a 8-goal encounter which they won by a 2 goal margin. The Blues were looking to win the match and secured a top 4 spot which automatically sees them qualify for another Champions League Season. However, Liverpool came into the game flying with 3 quick goals in the space of 20 minutes before the break with Naby Keita leading the charge for the first goal, followed by a the super-assist player Trent Alexander Arnold scoring the second and Wijnaldum sealing the third goal for the Anfield Side just before the break. The score line as at Half-Time was 3 – 1 as the French Striker Olivier Giroud pulled one goal back for Chelsea.

Second 45 kicked off very similarly to the 1st as Liverpool were a bit ahead of Chelsea in terms of possession and decisiveness on the ball and in the 55th minutes, Trent Alexander Arnorld swings in a great cross which was met perfectly and directed to goal by the on rushing Firmino to put Liverpool 4 goals up to Chelsea’s 1, Frank Lampard brought on Tammy Abraham and took off Giroud in the 59th minutes and he was quickly at in the goals as he tapped in a low ball from a beautiful cut back from the new sensational Chelsea siging Pulisic who had done a great work in the build up to the goal driving through the heart of the Liverpool defense and taking out like 3 players in the process before he squared to Abraham for his cool finish. Pulisic would later be rewarded with a goal of his own too in the 73rd minute after a brilliant effort saw him dribble pass Liverpool defenders yet again before he put the ball past Kepa in goal for the blues. Liverpool would later get the final 5th goal of the night as Alex Oxlade-Chamberlain connected a teasing low cross from Robertson from the left to seal the win on a beautiful night at Anfield for the Champions Liverpool.

Liverpool finally got Premiership trophy presented in a very well arranged trophy presentation ceremony with the neccessary fire works and champainge popping and splashing. The trophy was presented to the Liverpool Captain Jordan Henderson who missed the match due to injury by a Liverpool Legend, Former Player and Coach, Sir Kenny Dalglish on the Kop at Anfield. It was majorly a subdued celebration as there were no fans to celebrate the the win with them but they made do with celebrating on socal media as social media was buzzing as Liverpool present and former players fans took over have one thing or the other to say aboiut how special the occasion is to them.

Here is to wish all Liverpool fans all over the world CONGRATULATIONS on a very well derserved Premiership Title win..YOU WILL NEVER WALK ALONE.