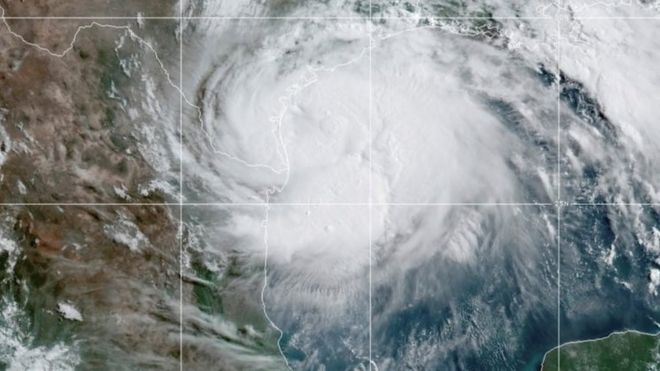 Hurricane Hanna has made landfall in southern Texas, with US officials warning of life-threatening storm surge, strong winds and heavy rains.

Governor Greg Abbott issued a disaster declaration for 32 counties, saying the coronavirus outbreak would complicate the work of the emergencies services.

Hanna made landfall on Padre Island on Saturday, and is now battering the area between Corpus Christi and Brownsville.

Hanna was a Category One hurricane, the lowest level on the five-step Saffir-Simpson scale.

“Any hurricane is an enormous challenge,” Gov Abbott said on Saturday. “This challenge is complicated and made even more severe, seeing that it is sweeping through an area that is the most challenged area in the state for Covid-19.”

The National Hurricane Center (NHC) warned that a “life-threatening storm surge will continue along portions of the Texas coast from Port Mansfield to Sargent”.

It urged local residents to follow advice given by the emergencies services.

It added that “rapid weakening is expected as Hanna moves farther inland” over Texas and into north-eastern Mexico on Sunday.

Separately, Hurricane Douglas – with maximum winds of up to 90mph – was approaching Hawaii in the Pacific, the NHC said, warning of damaging winds, flooding rainfall and dangerously high surf.

US President Donald Trump tweeted that his administration was closely monitoring the storms. “We continue to closely co-ordinate closely with both states,” he said.

Hanna hits Texas as the southern state is struggling to contain the coronavirus outbreak.