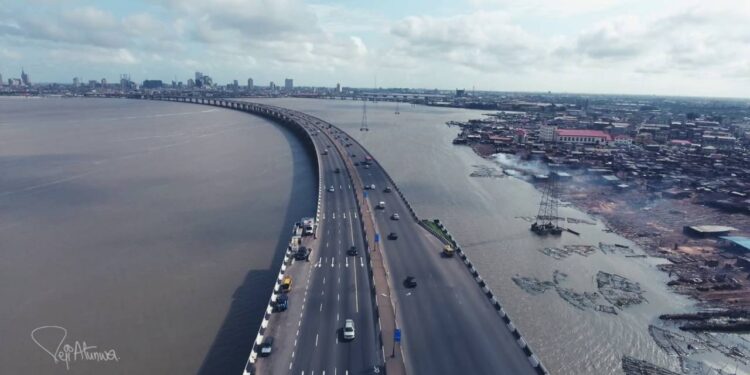 A Lagosian, Otunba Doyin, has shared his agonising experience with about 12 notorious armed robbers who took over Ojuelegba Stadium road in Surulere on Sunday and dispossessed road users of their belongings following the lockdown of the Third Mainland Bridge.

Road users – both stranded and stuck in traffic – were said to have been taken aback on Sunday July 27 after armed robbers flooded Ojuelegba, Stadium and Barack road en-route Apapa and Lagos Island for hours operating at ease.

Doyin, with a first hand experience, narrated, “Yesterday was hell and I would live to remember it for bad experience. Like myself, it was also the same for many Lagosians who were either robbed or thrown into anxiety for hours along Ojuelegba-Stadium-Barack road en-route Apapa and Lagos Island.”

“It was a flipside of the Third Mainland Bridge closure and we all saw it coming. Perhaps an oversight on the part of Lagos state, security of lives and properties of residents who would get trap in traffic as a result of the pressure on Ikorodu road and other alternative routes wasn’t given much priority.

“As expected, the closure of the bridge has put more pressure on vehicular movement along Ikorodu road. I expected yesterday to be different from other days since it was closed but I was wrong. It turned out to be the ‘Sunday Night of Horror and Anxiety’. I had expected my trip to Apapa from Ogba to take approximately one hour and 15 minutes. I left Ogba by 6:30p.m. and got to Fadeyi before 7p.m.”

Doyin felt a satiating relief at the uninterrupted flow of vehicles little did he know that he had just begun a journey of trauma and apprehension. “By the time I got to Oju-Elegba, it had almost become a standstill and shortly after the bridge, it came into a total lockdown”.

He, however, heaved another deep sigh of relief and confidence when he saw few armed mobile policemen hopping out of their vans to go ease the road for their bosses. “30 minutes after, nothing changed and they returned without success. Unfortunately for the trapped convoy there wasn’t any opening for them to escape and drive against traffic”.

The police escorts were in two groups, according to him. After about three frustrating hours, an opportunity presented itself and swiftly the convoy saw grappled it. “Thanks to their SUVs that could climb the small but unauthorised median that led them out of the mess. On escaping, one drove against traffic, the other obviously discontinue the journey and turned back”.

Perhaps as this was going on, scores of “bad boys” were prowling in the dark, waiting for appropriate time to launch attack. Barely 15 minutes after the convoy left while approaching Alaka, about 12 men marched towards the traffic from the other side. “By then our snail speed movement had again come to standstill”.

Just like a thief in the night, yes in a jiffy, the bandits struck. “They took on the vehicles randomly. They didn’t plead with motorists to wind down glasses or surrender keys. They helped themselves by smashing the glasses with hammer and their glittering cutlasses”.

“The exercise lasted for few minutes but they left many families in tears. A young couple was not so lucky. No, they were not killed but the operation left their one and half year old baby in distress. At a tender age, the small girl saw gun pointed at her parents as she woke up with the noise of the smashed glasses.

While he recalled that other victims were counting their losses, a few of them including him moved towards the distressed family to help pick one after the other, particles of glasses on the body of the innocent girl.

According to Doyin, the young man who had splintered like a Cheetah said he didn’t know they had guns and that he could overpower them with the help from some of us.

“Of course, they welcomed him with gun and pounced on him. The man holding the gun was persuaded by others not to shoot. They left with his wallet, phones and other gadgets. At the end, five vehicles were touched at our spot with many losing wrist watches, gold accessories, phones, wallets containing ATM and ID cards and cash”.

After ‘our visitors’ had left, announcement was made that all other occupants in the cars and commercial buses should come down and walked on both sides of the road, leaving only the individuals behind the wheel. Some people didn’t see sense in this but all the same, those attached to trailers and commercial buses still came down to provide security.

Although Doyin was spared, “Not by my might but pure grace of God. Did I hear you say unmerited favour? It was God but I still feel pain for those who lost their valuables and the hours I was in fear. While there, I missed the news I was meant to monitor in office. The idea of using my phone came to my mind but I couldn’t summon the courage to put it on.

While raining swear words on the assailants, Doyin and others who witnessed the shocking moment blamed the governments – both state and federal – for not being proactive enough to have foreseen the security threat that could come on the heels of the new traffic regime.

“Many people think police should have been strategically positioned along the road as it was done on the Third Mainland Bridge until recently, to ward off unwanted guests”, as he called on the state Governor, Babajide Sanwo-Olu, to save the situation.