• Reminds them they were once civilians
The State Commissioner of Police, Hakeem Odumosu, has tasked the 651 newly promoted officers of the Lagos State Police Command to always treat civilians with the fear of God.

The CP, who made this call at the decoration ceremony of some of the officers of his Command among those recently promoted by the Police Service Commission, reminded the officers that they were once civilians before they became policemen.

The 651 officers from various ranks of the command were among those that benefitted from the mass promotion across various commands in the country.

Odumosu further reminded the officers that the Nigeria Police is an institution that derives its authority from the populace as enshrined in the Constitution. “So, officers should treat members public with respect”.

He reminded the officers not to forget that since their enlistment in the Nigeria Police Force and progression on various ranks over the years, they had lost some of their colleagues on different ranks to death. “Therefore, you must continue to appreciate God for keeping you alive and being promoted”. Odumosu recalled.

He therefore charged them to always remain grateful to the Inspector General of Police, Mohammed Adamu, whom God used to promote them out of hundreds of other officers.

He added that the State Police Command has the highest number of promoted officers in the recent exercise.

While congratulating them on their new ranks, Odumosu reminded them that “to whom much is given, much is expected”.

He therefore emphasised the need for them to always take responsibility for their actions which must be in accordance with extant rules of the force.

The Lagos police boss reminded them of the maxim that “handling the rifle is a death warrant” but depending on how one handles it. He also harped on the fact that on whatever level, from the rank of corporal, more responsibilities go with each rank.

He charged the officers to always display exemplary character to their subordinates to emulate.

“As you carry out your responsibilities on your new rank, bear in mind that certain challenges would arise to test your knowledge, ability and capacity,” he advised.

While charging the newly promoted officers to carry themselves in dignified manners that correlate with their new ranks, Odumosu encouraged them to allow their new ranks positively reflect on the life style of their families. “Carry the new rank with highest esteem”.

The police boss also reminded the officers of the bad image some police personnel have given the Force over the years.

As a result, he implored the officers to abort whatever sinister practice that had been associated with their old ranks so that the IG of police would not regret approving their new promotion.

The Deputy Commissioner of Police in charge of Operations at the State Command, Mohammed Ali, urged the officers to strictly abide by all what the CP had said.

Meanwhile, the Lagos State Police Public Relations Officer; Bala Elkana who was promoted to the rank of Superintendent of Police (SP), was decorated. He became the state command’s spokesman two years ago till date. 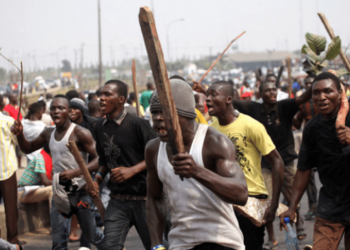 Three firemen of the Lagos State Fire and Rescue Service were reportedly injured, while their fire engine was damaged by...