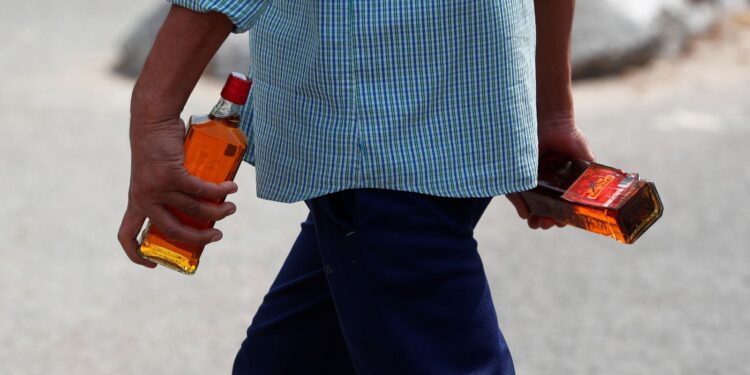 The men were said to be dependent on alcohol

The town where the men died is under a local lockdown due to an increase in coronavirus cases.

Ten men have died in an Indian town after drinking alcohol-based hand sanitiser, as local liquor shops were closed due to a coronavirus lockdown.

The men, from the town of Kurichedu in Andhra Pradesh, were said to be dependent on alcohol.

“Some people who are heavily addicted to alcohol had been consuming hand sanitisers for the high,” said Siddharth Kaushal, the top police official in the district.

“Alcohol is not available because of the lockdown, but hand sanitisers are easily available.”

Several other people who had also drunk sanitiser were discharged from hospital, Mr Kaushal said.

He added that some of those who died had other health conditions.

Family members of the victims told police they had fallen unconscious hours after drinking the hand sanitiser, according to the Hindustan Times.

It is not known how much they had consumed.

Local media said the victims were between the ages of 25 and 65.

India recorded its steepest spike in new coronavirus cases on Saturday with 57,118 new cases in the past 24 hours. The health ministry also reported 764 additional coronavirus-related deaths, taking the total to 36,511.

Most economic activities have reopened to avoid financial disaster, but many states are isolating localised areas where infections have jumped.

There is a strict lockdown in place in Kurichedu after reported cases in Andhra Pradesh rose nine-fold within a month. Cases have increased by three-fold in the country as a whole over the same period.

The state has the highest rate of testing per million people in the country.