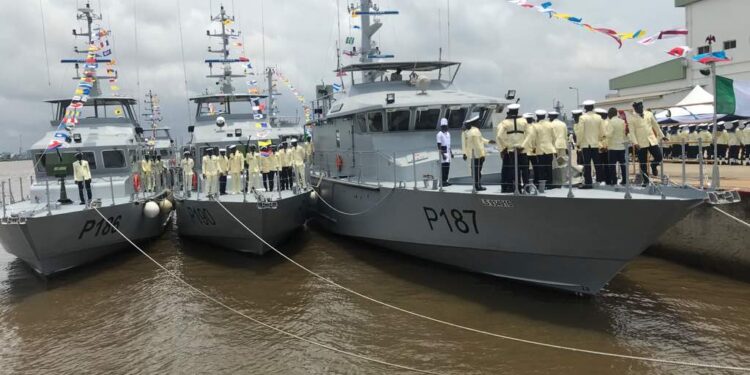 In its efforts to combat insecurity and illegalities around the country’s territorial waters, the Nigerian Navy, Monday, said it has deployed eight of its warships and two fighter jets.

The Fleet Commander Western Naval Command who is also the exercise Operations Tactical Commander (OTC), Rear Admiral Tanjuma Moses, told newsmen on Monday that the deployment is part of a 30 days sea operation tagged, Okun Alaafia II, a Yoruba word for Calm Waters 11, which aims at checking illegalities around the country’s backwaters.

“Since the operation started about 11 days ago, two ships and four suspects have been arrested for allegedly being involved in petroleum products theft along Lagos waters.

Speaking, Admiral Moses averred that at the time the two ships, MV Mother Comfort and MV Sea Supply, were arrested they were found to be laden with 240 metric tonnes of Diesel and 80 metric tonnes respectively.

He says, “Operation which was flagged off by the Flag Officer Commanding Western Naval on Friday, July 24 this year in the course of carrying out statutory responsibility of protecting the Nation’s maritime domain in Western Naval Command Area of Responsibility to sustain the gains of previous Operations and Exercises which the Command had conducted in the past.”

“The efforts form part of the Chief of the Naval Staff, Vice Admiral Ibok-Ette Ibas’ Operations Objectives of his Strategic Directive.

“In the last eleven days, officers of the command intercepted and interrogated two vessel of interest observed to have been engaged in suspicious movements. One of the vessel was once intercepted, boarded and searched by NNS NGURU on 17 June, 2020 at the Atlas Cove Single Buoy Mooring area.

“Furthermore, narrations of one the ship’s captain on the voyage of the vessel were inconsistent with its movements, that was tracked” he added.

Admiral Moses continued that based on the operations posture of the Western Naval Command underlined by the foregoing successes against perpetrators of criminalities within the Nation’s maritime environment.

He, however, reassured that the Nigerian Navy would not rest on it oars to provide necessary conducive environment for law-abiding members of the public to carry out legitimate maritime-related businesses.

“May I further request that as partners in progress, members of the public are free to divulge credible information to units in your localities to enable it get rid of all forms of criminality”.