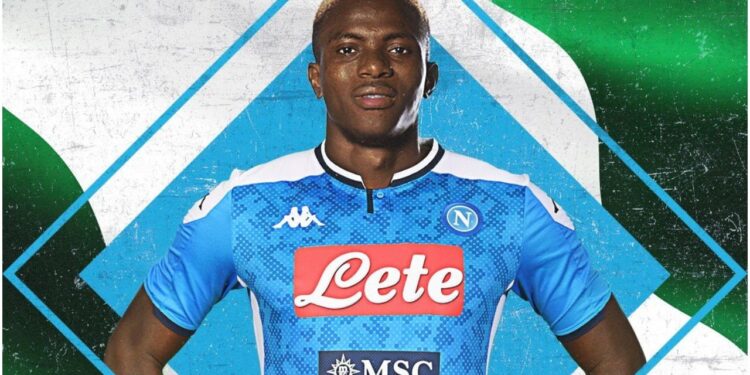 Italian Seria A side S.S.C Napoli have confirmed the deal to sign the fast rising Nigerian Star Victor James Osimhen in a deal that would see him become the most expensive African player ever as it stands, the deal would  reportedly be worth 81.3 million Euros in add-on and bonuses .

The 21years old Osimhen was earning a total  €80k monthly with Lille in  France and he  is expected  to now be  receiving  between €4m to €5.5m per annum excluding add-ons and bonuses, basic fee is €71.2m plus €10.1m in guaranteed bonuses.

Osimhen’s eventual total fee would see the deal rise to €81.3m, which would have surpassed the last season’s sale of Nicolas Pépé to Arsenal for €80m.The deal to bring Osimhen to Napoli dragged at a time and negotiations to bring the fast rising Nigerian star stalled for weeks due to the fact that Osimhen part ways with  his previous agent, Jean-Gérard Benoît Czajka to engage the services  of William D’Avila who is more renowned for helping  players broker moves to Italy.

The former Wolburg player also had a major setback because he had extended period of holidays in Nigeria where he was away to bury his late father Mr. Patrick Osimhen who sadly passed on recently and Victor had to stay back to appropriately mourn and be with his family and loved ones and also afford himself enough time to be mentally ready to take a decision about his future.

Napoli were determined to get their man and they demonstrated great resolve all along  as it was even reported that manager Genarro Gattuso was once quoted as willing to take a pay cut if need be to actualize the aim of securing Osimhen’s signature. The move to Napoli would also be beneficial to his former club, Belgian side Charleroi, as they would be getting  around €7m, a fee which represents a sell-on percentage fee that was included in his contract to Lille.

Osimhen scored 13 Ligue 1 goals  in 27 games and 8 in 38 in all competitions for Lille  right before the French league was paused during the COVID-19 break and eventually called off.

Osimhen is a World Champion at age grade level as he was part an important part of the Nigeria Golden Eaglets that won the 2015 U-17 FIFA world cup in Chile where he won the golden boot and the silver ball in the competition, He has been capped 9 times by the Super Eagles and has 4 goals already.

Here is to wish Victor Osimhen a very successful time in Napoli and we will definitely be following up with his progress.