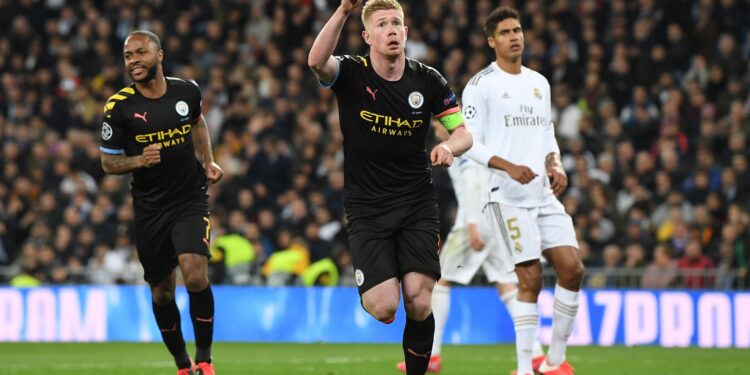 Manchester City have qualified for the quarter final of the UEFA champions league at the expense of fourteen time champions, Real Madrid.

Pep Gurdiola’s men took advantage of two defensive blunders from Madrid defender Raphael Varane to put the encounter beyond Madrid who were trailing 2-1 from the 1st leg which was played over 3 months ago at the home ground of Madrid. The game ended 2-1 on the night and (4-2) on aggregate as Manchester City marches on into the quarter final of the Champions league.

Manchester City got up and running and got their noses in front as early as the 9th minutes when Raheem Sterling taped in a simple ball into the Madrid net after Raphael Varane was disposed off the ball by Gabriel Jesus who squared the ball to Sterling for a simple and composed finished. Madrid quickly got back into the game with an equalizer on the night with a Karim Benzema headed goal from a pin point Rodrygo cross, which seem like Madrid was in for the comeback as they were still trailing by 2 goals, it ended 1-1 into the 1st half.

City got back stronger in the second half of the game as they had several chances to kill off the game but Thibaut Courtois kept Madrid in the game as he was called upon to make saves after saves as Madrid struggled defensively for the most part of the half and even could not manage to put City under real pressure. Manchester City killed all hopes of a Madrid come-back in the 68th minute when Gabriel Jesus capitalized on another Varane blunder to nick in the ball beyond Thibaut Courtois in goal for Madrid.

It ended 2-1 in favor of City after 90 minutes and (4-2) on aggregate as Madrid are dumped out of this year’s UCL and City would be playing in the quarter finals next week. It is worthy of note that this is the first time Zidane, as manager of the Madrid team, has been eliminated from the UEFA Champions League. Pep Guardiola’s City would have a chance to man a real challenge as finally landing their first Champions League trophy and would be playing next in Lisbon for the single-leg quarter-final against Lyon, on August 15 as stipulated in the new Champions League Format after resumption of matches during the COVID-19 pandemic.

JUVENTUS CRASH OUT OF CHAMPIONS LEAGUE

The Italian giants have crashed out of the UEFA Champions League during the Round of 16 Second Leg Match with Olympiacos Lyon. Two spectacular goals was enough for the Juventus side to win the Second Leg of the round but this was not enough as Lyon won the round on away goals. This may have an adverse effect on ratings for the exceptional footballer, Ronaldo. The Barca side are playing today against Napoli and Ronaldo’s rival, Lionel Messi has a chance to play more games than Ronaldo in the UEFA Champions League should the Barcelona qualify for the Quarter-Finals.

The Juventus side acquired the services and skills of Ronaldo just in a bid to have a shot at the Champions League trophy. With the two goals he scored, he has proved exceptional but it was not enough to see them qualify for the next round. Juventus may be making some critical decisions in the next few days as regards the team.