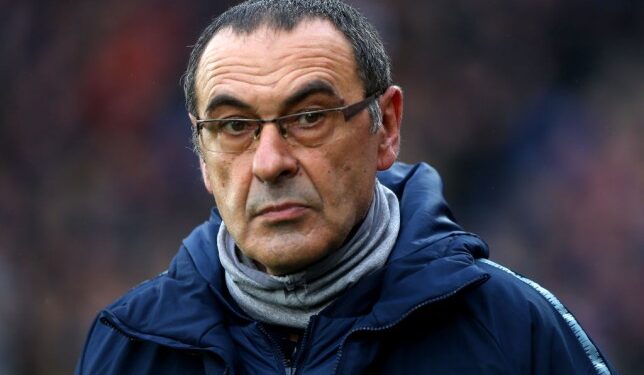 Following a round of 16 exit at the hands of Lyon for Juventus on Friday night in the Champions league, there has been an immediate major shake-up in the managerial setting at the “old lady” as 61-year-old former Chelsea and former Napoli manager has been relieved of his position. Sarri who was hired at the end of 2018/2019 season coming from winning his 1st major trophy as manager for Chelsea, winning the Europa league for the Blues and later sacked shortly afterwards, The Italian was immediately named  by Juventus to succeed former coach  Massimiliano Allegri and he helped Juventus secure its 9th consecutive scudetto at the end of the just concluded 2019/2020 season.

An official Statement from Juventus read “Juventus have announced that Maurizio Sarri has been relieved of his post as coach of the first team, the statement went further to thank the coach for writing a new page in Juventus history by helping the team win its 9th consecutive scudetto. Sarri’s sacking has come as no surprise as results have not been going his teams way since the restart as there was a period of dip in form which saw Juve lose 4 of 12 matches and they only managed to win the title by a single point ahead of rivals Inter and most importantly, an European success which is top most priority for the team and its teeming fans have not been delivered , and also the nature of the loss to Lyon despite the win on the night has left a shadow of doubt on Sarri’s ability to lead the team to UCL glory in future.

A swift move by Juventus has seen them name their former player Andreas Pirlo as new head coach on a two-year deal. Pirlo aged 41 played for Juventus between 2011 to 2015 and made 164 appearances in the process winning 4 consecutive Serie A titles, 2 Supercopa Italina, and a Copa Italia trophy before moving on to join New York City in the MLS and calling time on a playing career in 2017. Juventus only just named Pirlo as coach of the U23 side less that a forthnight ago and he was immediately promoted to the 1st team and handed a 2 year deal.

He enjoyed a successful National team career earning 116 caps for the Azzuris of Italy and he was an important member of the 2006 FIFA World Cup winning team.

It would be worthy of mentioning that Pirlo has no prior managerial experience and Juventus seem to be taking a risk they would hope wont backfire as they are looking to experiment and hope his  knowledge and understanding of the game as a player would be enough to steady the ship of the “old lady” and manage the big players in the team like Cristiano Ronaldo.