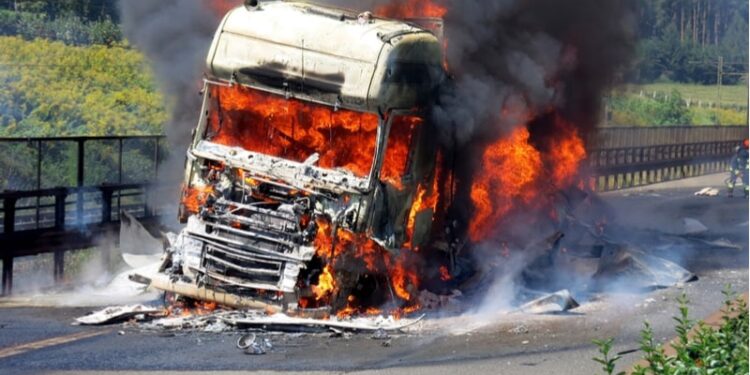 A truck laden with electrical appliances has on Sunday gutted fire on Agboju road, Festac side, Badagry expressway, Lagos State at 5a.m. this morning.

The Federal Fire Service official, DSF Onwana, currently on ground to abate further damage, told LagosToday that they arrived at 6a.m to curtail the fire while the Lagos State Fire Service joined swiftly.
According to Chime, they got the distress call at past 6am. “The incident occurred at past 5a.m. This is what we always tell them. When there is an emergency, stop trying it yourself.

“When we got here at past 6a.m. we met the tire on burning. Lagos Fire Service joined,” he noted.

On the possible cause of the fire incident, Chime noted that although they are not professionals in that field, they suspect overheated clutch – the rubbers.

The truck was conveying electrical equipment like adapter, extensions among others on the road when the incident occurred.

He confirmed that no live was lost. “There are no casualties. The entire commodities are not badly affected. So now they are being transferred into an empty bus.”
Other respondents currently combating the situation include police officers from Festac Division, Area E.