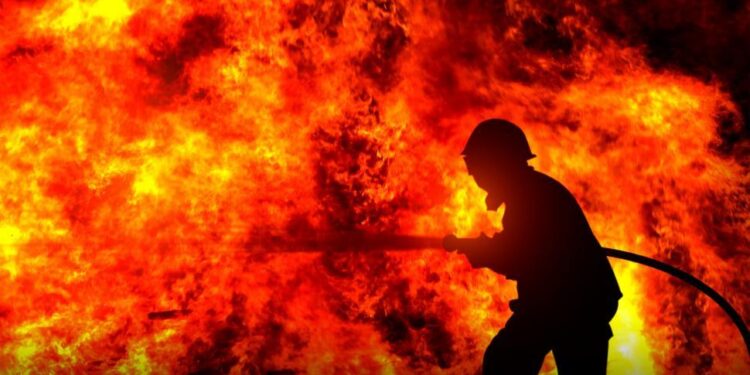 The gas explosion, which occurred at 19B Alakoso Industrial Estate in Lagos today, injured three adult males, affecting four cars, one bus and two trucks in an incident which did not record any fatalities.

Although the cause of the explosion is yet to be revealed, LASEMA noted that it occurred from one of the trucks used in conveying oxygen gas cylinders to hospitals from a gas company domiciled in the estate.

According to Preliminary Report of the explosion LASEMA said it received an emergency call via its Toll Free numbers in the Control Room and immediately activated its response team to the incident scene.

The Head of Public Affairs LASEMA, Nosa Okunbor noted, “Upon arrival at the scene of incident it was discovered that an explosion occurred in one of the trucks used in supplying oxygen gas cylinders to hospitals from the Gas company.

“Emergency responders were able to extinguish the inferno before it extended further.

“Brief post disaster assessment was done and the following was
revealed in the course of the assessment.

As a result of the explosion, three male adults sustained various levels of injuries and were taken to Gbagada General Hospital. Four cars, one bus and two trucks were affected.

In another of its operations, LASEMA Response Team put out a storage fire at a shop used as a warehouse in Alakoro, Oke-Arin, Idumota without loss of life nor injuries sustained as a result of the incident.

The fire incident which cause could not be ascertained, occurred in a Shop which was utilised as a warehouse on the second floor of a 3-Storey building and was promptly extinguished before it could escalate to other parts or floors of the building.

“Preliminary Report on the fire incident at Alakoro, Oke-Arin, Idumota, Lagos Island, has it that, “On arrival at the incident scene, it was discovered that a Shop used for warehouse in a 3-Storey building caught fire.

“Investigation carried out revealed that the fire which cause was unknown, affected only the warehouse on the 2nd floor of the building.

“No loss of life, nor injuries sustained as a result of the incident.

“The interventions of the emergency responders (LASEMA, alongside LASG fire, Federal fire services, were able to arrest the fire before it could escalate to other shops and adjoining buidings.

“Dampening down completed and operation concluded”.