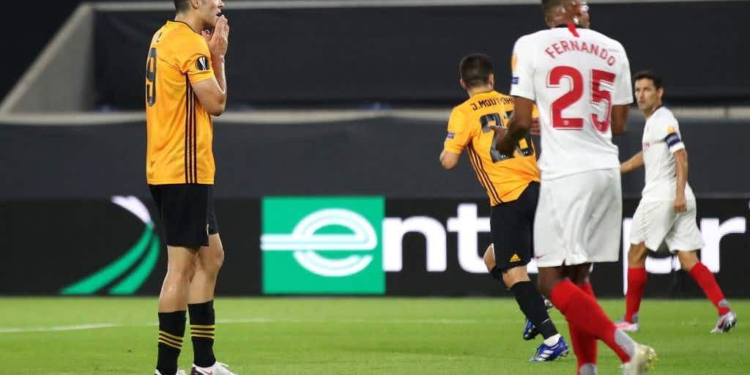 Sevilla are perennial champions of the Europa league, they have a certain understanding of playing in the competition and they have proved that yet again yesterday night when they narrowly edge out Premier league side Wolverhampton Wanderers FC to secure their place at the Semi-final of the Europa league.

Wolves had a perfect opportunity to get their noses in front in the game as early as the 12th minute when they were awarded a penalty from a foul play on Adama Traore who made a fine run into the area but was brought down and a penalty was awarded and Raul Jimenez stepped up but was denied from the spot by Yassine Bounou in goal for Sevilla. VAR upheld the penalty safe despite the replays showing that the Sevilla goal keeper was slightly off his line by some centimetres and also a Sevilla player was spotted to have encroach the area while the spot kick was been taken.

Sevilla dominance was obvious for the majority of the game and the winning lone goal arrived very late, as late as 2 minutes from regulation time when Lucas Ocampos met an Ever Banega cross with an brilliant header to give the Spanish side a late lead, a lead which they held on to secure the win that takes them in to a Semi Final match to face Manchester United in the semi-final on Friday 14th August.

Wolves have not been at a Quarter final of a European competition since 1972.

SHAKHTAR DONETSK EASE PAST BASEL IN A 5-GOAL THRILLER

Shakhtar Donetsk eased past Wolves with a 4 – 1 to qualify for the Semi-Finals of the Europa League. Most of the goals in the match were scored by the amazing Brazilian footballers of the Donetsk side.

Basel got a consolation goal from Wolfswinkel on the 92nd minute mark of the match. By the end of the 90th minute and with a 4 nil lead, Taison had helped his team to an amazing win and he was awarded the Man of the Match.