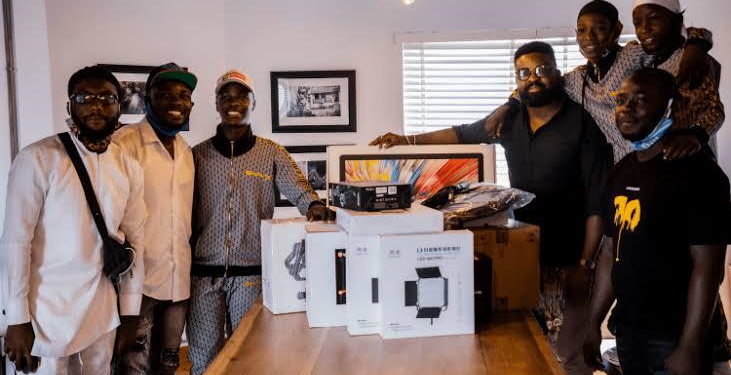 What began as a caricature-esque flick might have just become the stardom ticket for Lagos-based child creatives, Ikorodu Bois. Yesterday, the group received a set of top-shelf production gear from American Media Giant, Netflix.
The Ikorodu Bois, named after their habitat in North-Eastern Lagos went viral for their unusual makeshift recreations of local and global film trailers and music videos.
The Ikorodu Bois, which consist of 15-year-old Muiz Sanni, 10-year-old Malik Sanni and 13-year-old Fawas Aina, uploaded a video of themselves excitedly umboxing their gear, on Twitter.
They received a voice recorder, cameras, Boom microphones, tripods, an Apple iMac computer among other tech accessories.
Recall that, in June, Netflix retweeted their recreation of the movie, Extraction (2020). Following that, the daring team were invited by the movie’s producers, The Russo Brothers, for the premiere of the movie’s sequel.
The Ikorodu Bois said that they felt elated by the gestures.
“This is the day we’ve been waiting for all our lives,” the group replied.
Their 23-year-old brother, Mr. Babatunde Sanni, who manages them and edits their videos, said that sometimes the trailer recreations take up to a month to create.
“Some days we shoot but end up re-shooting just because we wanted to do our best,” he told CNN.
The boys have also gained the attention of Will Smith after they recreated a trailer for one of his Bad Boys films.
Prominent American actor and former wrestler, Dwayne Johnson, as well as Los Angeles Lakers basketball star, LeBron James, have also both reached out the group, recently.
Among others, some of the group’s most successful recreations include: Netflix’s hit show: Money Heist, Michael Jackson’s ‘They Don’t Care About Us,’ Burna Boy’s ‘Pull Up’ and DaBaby and Roddy Ricch’s ‘Rockstar’ music video.