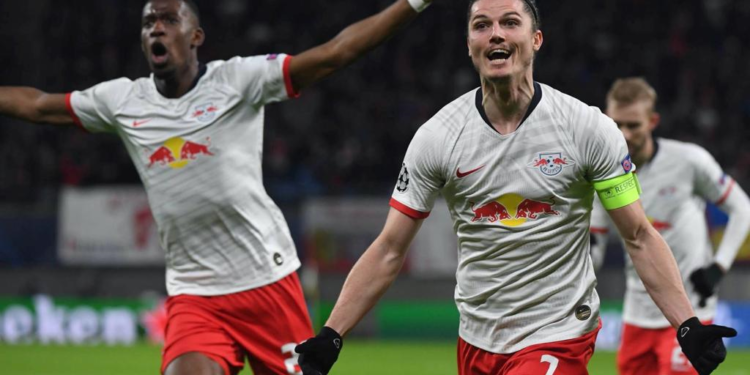 The ever impressive run of the German Bubdesliga side RB Liepzig run in this season’s champions league continues yesterday as they edged out 2016 finalist Atletico to confirm their place in this seasons last four, The Spanish side were considered as favorite heading into the Q-final as they have gone beyond this stage before and they also eliminated reigning Champions of the competition, Liverpool at the previous round  and not many expected Liepzig’s incredible run to continue and take them in to the Semis, but the German Bundesliga side were assured in their play and they earned the very first chance of the match and should have gone ahead early in the 1st half when defender Marcel Halstenberg missed a glorious chance which he could not put on target from close range as early as the 4th minute.

Liepzig got ahead in the game deservedly courtesy of a very nice period of interchange of sleek passes and a ball into the middle of Athletico box and was connected by Olmo and directed the ball into Jan Oblak in goal, Diego Simeone brought on Joao Felix, a move which paid off shortly afterwards as they seem to have gotten a foothold on the match as Felix and Diego Costa combined well in Liepzig’s area and  Felix was brough down by Lucas Klosterman and a penalty call was right made by the referee, Felix stepped up to take and slotted the ball calmly for a much needed Ahletico equaliser at just 19 minutes from regulation time .

Atletico would later suffer a very shocking loss that effectively ended their Champions league run this season after an unmarked Adams on the edge of the Atletico area directed a shot which ended at the back of Oblak’s goal to drive his side into the Champions League semi-finals, the ball caught a deflection off Savic’s outstretched leg which gave the helpless keeper no chance at all.

–        RB Leipzig are the first German side outside of Bayern Munich and Borussia Dortmund to reach the semi-finals of the UEFA Champions League since Schalke in 2010/11.

–        Atlético Madrid have failed to progress against a German side in the Champions League knockout stages for the first time ever, getting through on all previous three occasions (v       Bayer Leverkusen twice and Bayern Munich once).

–         RB Leipzig’s Dani Olmo is the first Spaniard to score against Atlético Madrid in the Champions League since Míchel netted for FK Qarabag in October 2017.

–          Marcel Sabitzer registered his 26th goal involvement in all competitions for RB Leipzig this season (16 goals, 10 assists), eight more than any other player currently with the    German club.

–          Tyler Adams’ strike was his first ever goal for RB Leipzig in what was his 28th appearance in all competitions for the club.

RB Liepzip would now face Paris Saint Germain in the semi-final match up at the Jose Alvalade in Lisbon on Tuesday night.