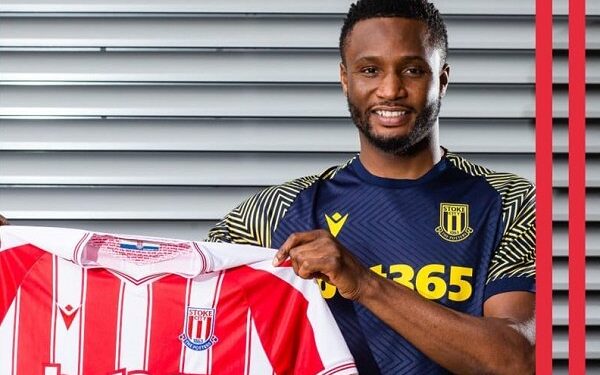 The Club announced that Obi would be joining as a free agent after parting ways with former Club Turkish Super league side Trabzonspor at the peak of the COVID-19 outbreak at the end of March.

The former Chelsea Midfielder was signed on a short term contract and would be playing for the Championship side in the 2020/2021 season, his second stint playing for a Championship side after having a short spell with Middlesbrough in the 2018/2019 season making 18 appearances and   scoring 1 goal before he made the move to Trabzonspor at the beginging of the 2019/2019 season where he played 19 games as well .

Mikel Obi would become Stoke City manager’s Michael O’Neill fourth signing of the summer as they bid to have a go at trying to gain promotion back to the Premier league, a project which Mikel is interested in as he was quoted as saying he would love to be back playing and end is illustrious career in the Premiership.

Mikel recorded successes with the Super Eagles of Nigeria as well as he was a key member of the 2013 Africa Cup of Nations winning side that delivered the country’s 3rd continental title.

The 33-year-old Mikel retired from International football after leading the team to a bronze medal finish at the last edition of AFCON in South Africa in 2019.