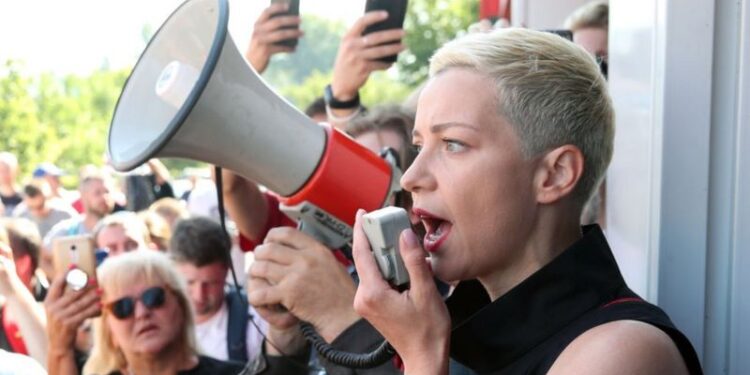 Maria Kolesnikova told BBC Russian last month that "to understand exactly what's going on, you really have to be here"

A detained Belarus opposition leader prevented officials from forcibly expelling her to Ukraine by tearing up her passport and throwing it out of a car window at the border, colleagues who travelled with her have said.

On Monday Maria Kolesnikova was forced into a van by masked men in Minsk.She is one of three women who joined forces to challenge President Alexander Lukashenko in August’s election.

Mass protests erupted after the disputed vote.”She was pushed into the back seat (of the car), she yelled that she wasn’t going anywhere,” Ms Kolesnikova’s colleague Anton Rodnenkov told a news conference in the Ukrainian capital, Kiev, on Tuesday.Mr Rodnenkov said he and another colleague had been kidnapped on Monday, driven between buildings, and interrogated with hoods over their heads and their hands tied.

They accepted an offer to leave Belarus with Ms Kolesnikova but when the car reached the border she refused to cross. The two men told journalists they did not know where she was now.

Earlier on Tuesday, officials in Belarus had claimed that Ms Kolesnikova was detained while trying to cross into Ukraine.

Meanwhile, in an interview with Russian media on Tuesday, President Lukashenko insisted he would not step down from power.

Dozens of people were arrested in fresh protests in Minsk, the capital. In recent weeks thousands have faced down violence and threats of arrest in demonstrations against Mr Lukashenko, who has ruled the country since 1994.

The EU has demanded the release of all political prisoners and says it is planning to impose sanctions.

Ms Kolesnikova is the last of three women leading the opposition to Mr Lukashenko to remain inside Belarus.

The main opposition leader, Svetlana Tikhanovskaya, says she won 60-70% of the election in places where votes were properly counted. She fled to Lithuania after she was detained in August.

What happened to Maria Kolesnikova?

On Monday, witnesses saw masked men seize Ms Kolesnikova on a street in central Minsk and push her into a minibus. Anton Rodnenkov and his colleague Ivan Kravtsov were abducted while driving to her flat following reports of her disappearance, they told reporters in Kiev.

Officials threatened to prosecute them until the two men accepted an offer to leave Belarus with Ms Kolesnikova.”What they were interested in was getting Maria Kolesnikova outside the country. They said this was necessary to de-escalate the situation in Belarus,” Mr Kravtsov said.

The three were taken to the border with Ukraine by men in plain clothes early on Tuesday morning, Mr Rodnenkov said.

But when the car reached a checkpoint between the two countries, Ms Kolesnikova prevented her deportation by ripping up her passport and throwing away the pieces, he said.

“It was clear that she was being taken by force, she was resisting,” Mr Rodnenkov said.

“She climbed, climbed from the car and she walked proudly to Belarusian territory,” Mr Kravtsov said, adding: “She’s really a hero. You must understand that. She’s very dedicated to what she’s doing now.

“Last month Ms Kolesnikova told BBC Russian in an interview: “To understand exactly what’s going on, you really have to be here.”Ms Tikhanovskaya has called for her colleague to be immediately freed.

“By kidnapping people in broad daylight, Lukashenko is showing his weakness and fear,” she said in a statement.

Another female activist, Olga Kovalkova, announced on Saturday she had fled to Poland amid threats of imprisonment.

What’s the latest from Lukashenko?

Earlier on Tuesday, Mr Lukashenko told Russian reporters that Ms Kolesnikova had been held for “violating the rules on crossing the state border”.

In a sit-down interview, the long-term leader was quoted as saying he would not step down.

He conceded that some Belarusians might be “fed up” with his rule but he was adamant that he wouldn’t leave office, according to the journalists.

He also asserted that he was the only person who could “defend” Belarus.

Alexander Lukashenko calls Vladimir Putin “big brother” in this interview and he’s increasingly dependent on Russia for support. But his comments reveal a confidence that Moscow needs him, too.

“You know what we agreed with the Russian establishment and leadership?” he asked the panel of Russian state TV reporters on the sofas before him. “That if Belarus breaks, Russia will be next.

“Back me up, Mr Lukashenko seemed to be saying to Moscow, and your own people won’t get any bad ideas about ousting a long-standing leader through popular protests.

As usual, he claimed the unrest in Belarus was fomented by hostile outside forces, mainly America, via the internet.

But with opposition to his rule strong and persistent, Mr Lukashenko is now heavily reliant on his security forces.

So he had a message for them too. If I go, he argued, the riot police would be “slaughtered, torn to pieces. And what have they done wrong?”

Mr Lukashenko has twice appeared brandishing a gun during mass protests against his rule, and he told the reporters it was meant to show he had not fled.

He has accused Western powers of interference and is expected to visit Moscow “in the coming days” amid claims by Lithuania that he is planning deeper integration with Russia.