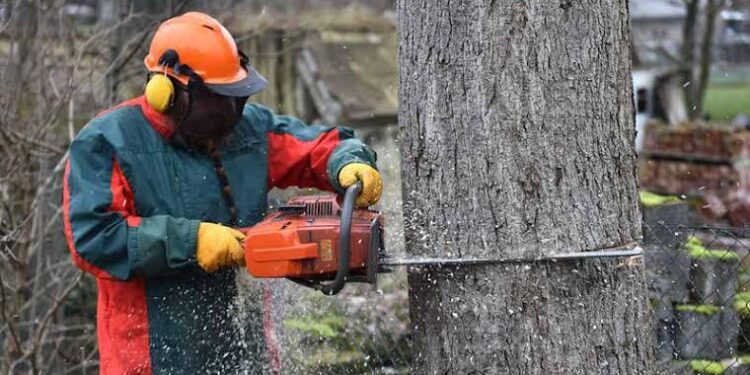 “This particular tree, I remember it from 25 years ago. We just have to do our job,” Abba Igomu, a construction worker with Julius Berger Plc, said, with a flash of remorse on his face.

For the past seven days, his company has been felling decades and century-old trees along the Bell Avenue/Bourdillion area of Ikoyi, Lagos, on instruction from the state government.

The area, which is also a linking road to the Governor’s Residence has been plagued by flooding owing to the poor drainages and narrow width of the road.

“We were told to cut over 44 trees. We have started since last week. We are trying to rehabilitate the road,” Abba said.

Most of the trees have existed for decades, and some centuries. They have been a source of joy and a signature to the quiet community. Their departure spells some sadness among the locals, but they also feel it is a welcome relief.

“When it rains, this whole area is submerged with flood. It is very bad and we have suffered it for a while now. Look at the roads: the drainages are not good; the road is narrow. When it rains you cannot enter this road; everywhere would be flooded.

“Yes, we would miss the trees, because we all know the importance of a tree and they have been here for a while, but still it would be a welcome relief,” James Ali, a resident in the area expressed.

For other residents like Mr. Ada Junior, “It is also a welcome relief, because if they fix the roads well the floods would stop. For a long time now, if it rains the water enters into our compound. The flood here is not good.”

Another resident simply identified as Seyi, expressed the same viewpoint, adding that the presence of the Governor’s House in the area was also a motivation for the state to repair the roads.

While the trees are not the sole cause of the flooding in the area, their absence would pave way for the construction workers to expand the roads and fix the drainages.

Nonetheless, their absence could also create some unintended harm on the society, especially with Lagos’ overpopulation issue.

‘‘Apart from its capacity to reduce urban temperatures by 4°C, it can also absorb pollution of all kinds, particulates, chemicals and even noise from the environment.”

While road rehabilitation projects are an inevitable reality which the city must approve, the lack of trees would also complicate the already growing problems of industrialisation.

Abiola expressed that the lack of trees would not add any benefit to the city’s ecological system, adding that the growing industrialisation in the state only led to considerable rise in urban pollution affecting air, water, and land.

Comparing this act of tree felling for road expansion with other countries, signify a trend among overpopulated cities.

Last year, it was reported by Indian Newspaper, The Hindu, that some decades-old trees along key communities in the Southern Indian area, called Telengana, were felled for road expansion projects. Barely a few months after that over 2,000 trees were also felled in the Chapainawabganj area of North-Western Bangladesh, which is a South-Asian country.

In Nigeria, it has largely been a practice of the past.

Recently, the Federal Capital Territory Authority (FCTA) and the Kano State Government, respectively, both enforced policies and issued strict warnings to developers and residents in the respective states who fell trees for road expansion.

Similarly, urban cities like Alabama, Florida and Georgia in the United States have faced a significant decline of trees, owing to road expansion projects.

The United States Department of Agriculture, two years ago, found out that over 36 million trees are felled in urban areas, yearly, leaving the cities at greater risk to hurricanes and other climate-related disasters.

While the city’s efforts towards urbanisation are indicators of development in the state, felling of trees, among other similar practices, are non-sustainable to the environment.

As the government continues its mandate towards serving the people, it is encouraged to always explore sustainable initiatives and alternatives in its developmental plans, especially in urban expansion, for the sake of the environment and, ultimately, its citizens.