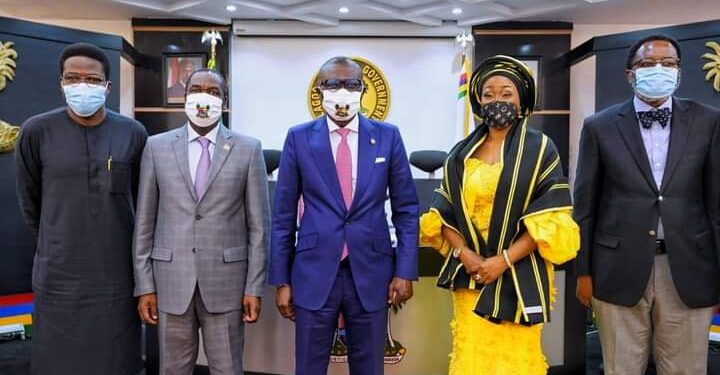 The Lagos State Governor, Mr. Babajide Sanwo-Olu on Tuesday inaugurated members of the State Task Force to curb the menace of human trafficking and irregular migration in the state.

The governor also charged members of the State Task Force on Human Trafficking to come up with brilliant ideas, innovations and policies that will assist the state government in curbing the menace.

He said: “The COVID-19 pandemic has exposed and exacerbated many global inequalities and plunged many economies like ours into recession, leaving millions of people at greater risk of being trafficked for sexual exploitation, forced labour, forced marriages and other crimes.”

What this implies, he continued, is that the pandemic has created more economic difficulties for many especially women, young ladies and children who are the most vulnerable and might become exposed to the perils of human trafficking in a bid to seek better lives.

“In view of this, I strongly believe that this initiative of constituting State Task Forces on Human Trafficking could not have come at a better time than now when it is needed more than ever that we put human dignity and human rights at the forefront,” he emphasised.

The governor further suggested that governments across all levels need to join hands and make collaborative efforts to put an end to the scourge of human trafficking.

“The government and people of Lagos State understand the value of partnership as an inestimable tool in combating the transnational organised crime of human trafficking and as a result, we use this opportunity to assure you of our unwavering support, collaboration and strong partnership in providing all that is needed to ensure we bring an end to the menace of human trafficking in our society.”

Sanwo-Olu also expressed his worry on the menace of human trafficking, which according to him has become a profitable venture for criminals who exploit people by kidnapping them and selling them into forced prostitution, forced labour and modern day slavery.

He said: “Everyday, in every country of the world, at least a person is reported as a victim of human trafficking while several other cases go either unnoticed or unreported.

“The menace of human trafficking has not only become a sad reality, it has also sadly become a profitable venture for criminals who exploit people by kidnapping them, selling them into forced prostitution, forced labour and also until very recently into modern day slavery.”

Unfortunately, human trafficking has now become that bitter bile that is not felt by the victims alone, but rather affects humanity in general as it encroaches on our right and dignity as a people.

“For years, local and international media have been awash with horrifying stories of people especially Nigerian women and girls who have been trafficked for sexual and labour exploitation, and also of migrants trapped in Libya in slavery-like conditions or dying as they crossed the Mediterranean Sea.

“These stories, however, sadly reflect the large and increasing problem of human trafficking within and from Nigeria in recent years and also gives certain credibility to the recent statistics by the International Organisation for Migration (IOM) that there has been a 600 per cent increase in the number of potential sex trafficking victims arriving Europe by sea, with most of them arriving from Nigeria.”

While noting tthat the situation of human trafficking has become a nightmare, the governor commended the National Agency for the Prohibition of Trafficking in Persons (NAPTIP) for their relentless efforts in the fight against human trafficking and irregular migration.

He also appreciated NAPTIP for the ways they have been rendering assistance to human trafficking victims that are being rehabilitated.

“I must applaud you for this brilliant idea of re-constituting State Working Groups on Human Trafficking into State Task Forces that will be equipped with the requisite skills and technical support to provide a platform to articulate and consolidate our Government’s policies and programmes aimed at countering the terrible scourge of human trafficking,” he said.

In her address, the Director-General of NAPTIP, Dame Julie Okah-Donli, said the problem of human trafficking and irregular migration have become a great national concern, especially with the large number of Nigerians trapped in sexual and labour exploitation in various African and European countries, apart from the hundreds that continue to die in the Sahara Desert and the Mediterranean Sea.

She said: “The State Task Forces on Human Trafficking have a pivotal role to play in ensuring adequate sensitisation at the grassroots and among vulnerable groups, providing services and support to victims who have been rescued and returned, as well as information sharing and law enforcements.

“This requires strong political will and budgetary provisions on the part of the State Government, in addition to the commitment of traditional institutions, religious and community leaders.”

Okah-Donli also commended Governor Sanwo-Olu and members of his cabinet for partnering with NAPTIP to stem the tide of the twin evils of human trafficking and irregular migration in Lagos State and Nigeria.

“Lagos State has in the past supported the operations of the Lagos Zonal Command of NAPTIP and I would like to appeal for stronger collaborations and support to enable the agency achieve its mandate in Lagos, which unarguably is the commercial business capital of Nigeria,” she noted.

Also speaking the Counter Trafficking Officer of International Organisation for Migration (IOM), Bertha Kaluocha Ngurulu, said migration is not a problem to be solved but a reality to be managed and therefore promised continued partnership with federal and state government in facilitating humane and orderly migration for the benefit of all.

Lagos State Commissioner for Justice and Attorney-General of the State, Mr. Moyosore Onigbanjo (SAN), who is Chairman of the Lagos State Task Force on Human Trafficking, assured Governor Sanwo-Olu and NAPTIP that his team will work tirelessly to fight the pandemic and ensure that people feel the impact of the task force in the State.

The inauguration of the Lagos State Task Force on Human Trafficking was attended by the Deputy Governor, Dr. Obafemi Hamzat, Head of Service, Mr. Hakeem Muri-Okunola and Solicitor-General and Permanent Secretary, Ministry of Justice, Mrs. Titilayo Shitta-Bey, among other government officials.