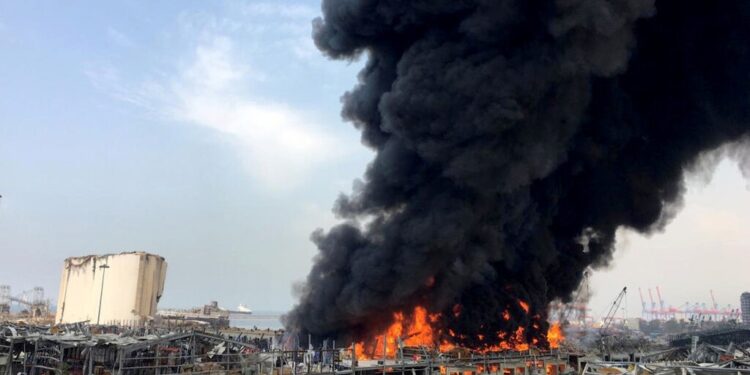 A new fire raged in the port of Beirut on Thursday.Credit...Reuters

Videos taken at the scene showed flames engulfing an already damaged warehouse in the port and a thick plume of smoke rising from the area.

A large fire erupted on Thursday in Beirut’s port, sending a huge plume of black smoke into the sky and unnerving residents still recovering from the horrific port explosion that devastated the city last month.

The fire was burning in a warehouse that had been damaged in the previous explosion. While much of the port was leveled by the August blast, the latest fire apparently began in the teetering skeleton of one of the remaining buildings.

Videos taken at the scene show flames engulfing an already damaged warehouse in the port and a thick plume of black smoke rising from the area.

The extent and cause of the fire were not immediately clear, but the Lebanese Army said in a statement that the fire began at a duty free warehouse where oil and tires were stored. Helicopters were responding to the scene.

Residents of the city, still reeling from the earlier blast, shared dozens of images and videos on social media, and they voiced their concern that another major disaster was underway.

Efforts to clear the area from the earlier blast, which killed more than 190 people, injured 6,000 and caused billions of dollars in damage, are still continuing, and some bystanders posted clips on Thursday of workers fleeing from the area.