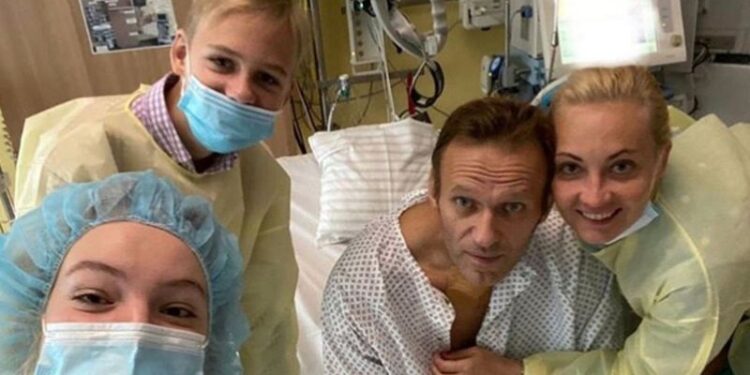 Alexei Navalny posted on Instagram from his hospital bed in Germany

The poisoned Russian opposition figure Alexei Navalny is to return to Russia, his spokeswoman has said.

“It’s puzzling to me why anyone should think otherwise,” Kira Yarmysh posted on Twitter.Mr Navalny also posted a picture on Instagram for the first time since he was poisoned, announcing that he was breathing free of ventilation.

He collapsed on a flight from Siberia on 20 August. Tests have shown he was poisoned with a Novichok nerve agent.

He was transferred to the Charité hospital in the German capital, Berlin.

His team alleges he was poisoned on the orders of Russian President Vladimir Putin. The Kremlin denies any involvement.

“All morning journalists have been writing to me and asking, is it true that Alexei plans to return to Russia?” Ms Yarmysh wrote.”Again I can confirm to everyone: no other options were ever considered.

“The announcement came shortly after Mr Navalny took to Instagram.”Hi, this is Navalny. I have been missing you. I still can’t do much, but yesterday I managed to breathe on my own for the entire day,” he wrote.”Just on my own, no extra help, not even a valve in my throat. I liked it very much. It’s a remarkable process that is underestimated by many. Strongly recommended.”There is a modest police presence outside the hospital where Mr Navalny is being treated, Ben Tavener from the BBC Russian service reports from the scene.There are two armed officers by one entrance and a police van that has been stationed outside for days, our correspondent says.Unconfirmed reports in German media suggest two further armed police units have been set up inside – outside the ward and by the politician’s bed.

Meanwhile, the Kremlin has ruled out a meeting between Mr Navalny and Mr Putin after the opposition figure recovers.”We do not see the need for such a meeting, so I believe that such a meeting will not take place,” Kremlin spokesman Dmitry Peskov said, according to the Interfax news agency.

Attack is the best form of defence for Kremlin

The Kremlin is sticking firm to its line that it has nothing to do with Mr Navalny’s poisoning and there is no surprise that Mr Putin’s spokesperson ruled out the possibility of a meeting between the president and his harshest critic.

Mr Putin has actually never called Mr Navalny by his name, trying to make it look like this politician is unknown and insignificant. They aim to persuade everyone – in Russia and abroad – that the Kremlin is not paying any attention at all to Mr Navalny’s activity, which is obviously far from reality.

Moscow’s reaction to Mr Navalny’s poisoning is based on its well-known policy that attack is the best form of defence.

Russia has not just rejected the allegations of any involvement in the attempt on Mr Navalny’s life, but insists that there hasn’t been any poisoning at all and the opposition leader simply fell ill.And today the chief of Russian intelligence, Sergei Naryshkin, has stopped just short of accusing Germany of poisoning Mr Navalny with the Novichok nerve agent.

He said there had been no trace of poison in Mr Navalny’s body when the politician left Russia. Mr Naryshkin also said Russia had destroyed all reserves of Novichok and therefore Moscow has got questions for Germany.

What is the background to the poisoning?

Mr Navalny is an anti-corruption campaigner who has long been the most prominent face of opposition to President Putin.

Mr Navalny’s supporters believe his tea was spiked at Tomsk airport on 20 August. He became ill during the flight, and the plane made an emergency landing in Omsk. Russian officials were persuaded to allow him to be airlifted to Germany two days later.

A nerve agent from the Novichok group was also used to poison ex-spy Sergei Skripal and his daughter in Salisbury, in England, in 2018. They both survived, but a local woman, Dawn Sturgess, died after coming into contact with the poison.