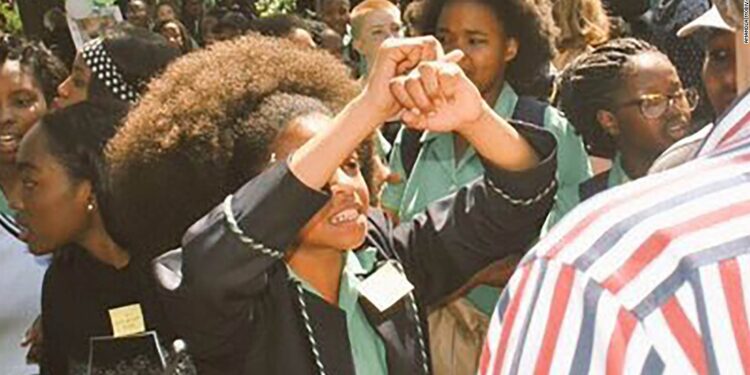 Retailers including Pick N Pay, Woolworths,Dischemall say they have removed TRESemmé products from their shelves, as has Clicks, the retailer which originally published the ad.

“Given the recent concern about the language used by TRESemmé to advertise their product line, we have decided to remove the products from our shelves while we engage with the supplier,” a spokesperson for Pick n Pay told CNN.

Two advertisements, one showing a black woman’s hair labeling it “frizzy and dull,” the other showing blonde hair, labeling it, “fine and flat” and “normal” set off protests at retailer Clicks.

The content and images of the advert were provided by TRESemmé, an American brand of hair care products, according to the company’s Group CEO Vikesh Ramsunder.

The pharmacy chain was forced to close on Wednesday in response to protests led by the opposition party Economic Freedom Fighters (EFF). They used social media to denounce the adverts as “racist” and “dehumanizing”.

The director involved in the campaign has since left the company and the country, Unilever said in a joint statement with the EFF on Thursday. The British-Dutch company promised an internal investigation and said it would take necessary disciplinary action if needed.

“Unilever expresses its remorse to all South Africans, black women in particular, for the racist TRESemmé SA image,” it added.

Unilever will withdraw all TRESemmé SA products from retail stores for 10 days as a “demonstration of its remorse for the offensive and racist image.” It promised to donate 10,000 sanitary pads and sanitizers to informal settlements.

Clicks will withdraw all TRESemmé SA products from its stores and replace them with locally sourced hair care brands, it said in a joint statement with the EFF on Thursday.

The company will also donate 50,000 sanitary pads and 50,000 sanitizers and masks to rural settlements. The pharmacy chain said it will award five pharmaceutical scholarships to Black and female students orphaned by HIV and AIDS.

“There is a long history of hair related racism in South Africa,” said Botlhale Tshetlo, the founder of Hairtural Studio, a natural hair salon in Johannesburg.

“During apartheid, a hair pencil test was used to determine racial identity. A pencil was pushed through the hair, if it got stuck in the hair and didn’t fall, the person was classified as black.”

A lot more shelf space is given to American brands than local brands, despite the South African climate being dryer than America, she said.

“Stocking local brands that are better formulated for the South African consumer is an important decision, long overdue,” Tshetlo added.

The EFF wrapped up its five-day protests at Clicks stores, which targeted 425 of about 720, allowing them to resume normal operations.

“Fighters & Commissars, we must extend revolutionary gratitudes for your fearless, selfless & disciplined defeat of #ClicksRacism,” said the leader of the EFF, Julius Sello Malema, in a tweet.

“The doomsayers have swallowed their fork tongues in utter disappointment. Be proud of all your effort to restore the dignity of a black child. Salute!”

In videos shared on social media, protesters dressed in red were seen throwing shelves in one of the Clicks stores.

On Tuesday, the retail chain won an interim court order to stop the EFF from “intimidating and threatening” its employees.

Perceptions of double standards and racism allegations have been a subject of continued discussion in South Africa, 26 years after the end of the brutal systemic racism of apartheid.

In 2016, a video posted on Instagram went viral, showing 13-year-old Zulaikha Patel and fellow schoolmates in a tense standoff with private security guards.

The students protested after they were told by teachers that their hair is “exotic” and that their Afros needed to be tamed.

It is not the first time in South Africa where marketing campaigns have resulted in a backlash against the brand.

In 2018, the EFF also led protests at Swedish retail giant H&M’s stores in South Africa over an online advert that showed a black child wearing a “coolest monkey in the jungle” sweatshirt.

H&M apologized for the ad and pulled the product from its stores globally.