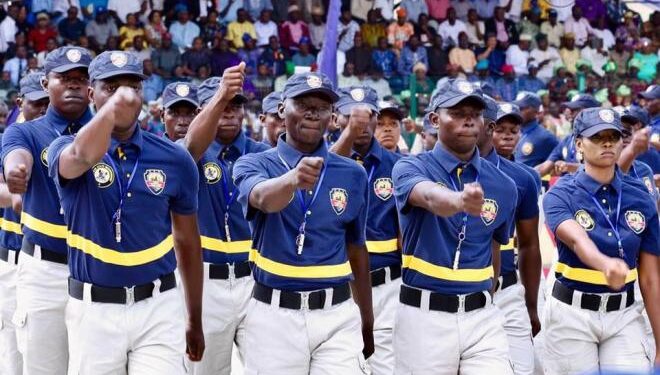 The General Manager of Lagos Neighborhood Safety Agency (LNSA), Mr. Adegboyega Bajulaiye, has charged the newly trained officers of the agency not to submit themselves to ridicule before the public.

Bajulaiye gave the charge during the graduation of a batch of newly trained officers of the corps at the Law Enforcement Training Institute, LETI, Public Service Staff Development Centre, (PSSDC) at Magodo on Friday.

He expressed total confidence in the ability of the officers, whom he described as more than qualified to handle the task of complementing the security architecture of the State and maintaining orderliness within Lagos neighborhoods.

“Don’t let anyone treat you with contempt or despise you. You also should not subject yourself to ridicule but instead walk with your heads high because the only thing that differentiates you from other law enforcement agents is the use of ammunition but in terms of competence, no one can relegate you”, Bajulaiye enjoined.

The GM, however, challenged all officers of the agency to guide their integrity jealously in order to earn the respect of the public and other security officials.

While encouraging the officers to develop a cordial relationship with their immediate communities, Bajulaiye said that such a relationship will aid the discharge of their duties and also portray the state government in positive light before the public.

He commended LETI for the creativity and innovation that the Institute has, over time, introduced in training the men of the various law enforcement agencies of the state government According to the LNSA boss, the agency has so far trained 810 officers out of 3,200 expected to be trained by the end of the year, as a new batch of trainees have been scheduled for another training programme