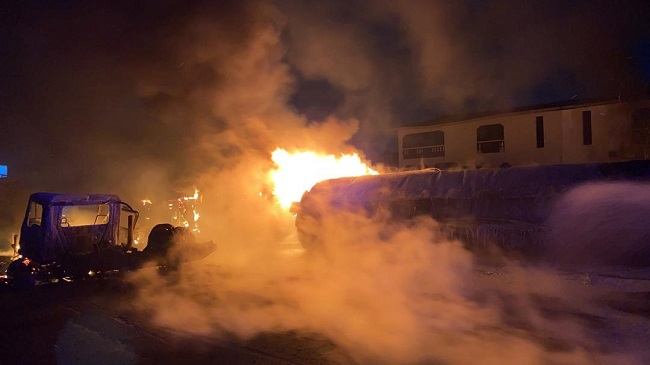 The tanker, laden with Premium Motor Spirit (PMS) was said to have lost control while in motion and as a result fell sideways.

The Federal Fire Service (FFS) announced this via its Twitter handle @Fedfireng on Friday night.

The agency urged road users to avoid the route and take alternative roads instead.

He added, “Upon arrival at the scene of incident, it was discovered that a tanker with unknown registration number conveying PMS lost control while in motion and subsequently fell sideways.”

Consequently, it led to an explosion in which two unidentified vehicles were burnt.

He further noted that a joint team of responders led by the Federal Fire Service, LASEMA, LASG fire service, LRU fire unit, Nigeria Police and LASTMA are working together to curb the inferno from escalating further.