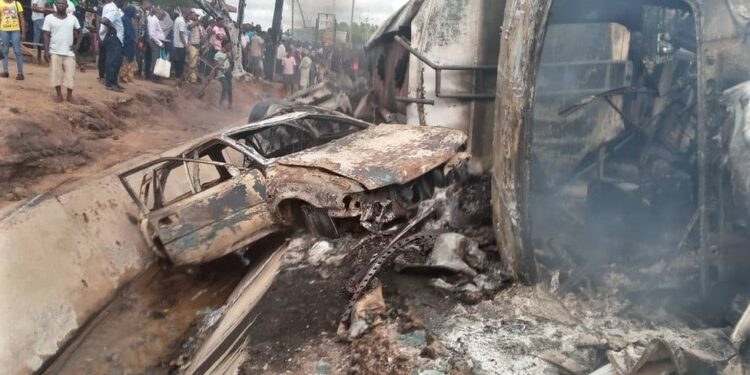 No fewer than 25 persons including five students of the Kogi State Polytechnic and three school children have been killed in a road crash involving a petrol tanker along the Lokoja-Abuja Highway, in Kogi State.

The petrol-laden tanker belonging to the Nigerian National Petroleum Corporation (NNPC) was said to have had a brake failure around 8 am.

Among those killed and burnt beyond recognition were five students of the state-owned polytechnic, three nursery school pupils, and passersby.

Also killed was a businessman identified simply as Samson, his wife, and three children. He was reportedly returning from dropping his children off at school as he usually does.

An eyewitness told our correspondent that the brakes of the tanker failed during an attempt to manoeuvre and in the process, fell on its side, trapping five vehicles trying to overtake it.

“I was about to cross the road when I noticed the tanker driver signaling to motorists to steer clear, but before you could say Jack Robinson, the tanker was on its side, falling on all vehicles beside it.”

“Immediately, the tanker fell, the fire started and incinerated all vehicles along its way,” he said.

The Federal Road Safety Corps, who arrived around 10 am came with an ambulance to evacuate the corpses, while residents made efforts to identify them.

The sector commander of the Federal Road Safety Corps, Idris Fika Ali, said 23 persons were killed in the explosion while one child escaped with injuries.

A statement issued by the chief press secretary to the Governor, Onogwu Mohammed, said, “Governor Bello is very sad to learn of the tragic loss of lives, many vehicles, property and other valuables in the petrol tanker fire while expressing his deepest condolences to the families of those affected by the ugly occurrence.”

The Governor also urged the students of the Kogi State Polytechnic to remain calm and peaceful, stating that he shared in their grief.