Private sector-led Coalition Against Covid-19 has donated food supply relief packages worth N1.4billion to the Lagos state government, for distribution to the indigent and elderly citizens of the state.

At the official handover ceremony at the governor’s office, the coalition said the food palliatives would cover 107,564 households in the state.

CACOVID, in a statement issued on Wednesday, noted that this was in its plan to feed over 1.7m households cutting across the 774 local governments in the country to cushion the effect of the pandemic.

Speaking during the handover in Lagos, CACOVID Lagos Representative and Head of Corporate Communication of Access Bank Plc, Amaechi Okobi disclosed that the coalition had already provided support to the states and federal government in the public health front.

“Having done all these we thought it right to provide relief packages to our country men, the poor and those most vulnerable in our communities”, he stated.

Amaechi told the state government to make the distribution seamlessly successful by constituting an Implementation Committee chaired by the governor.

He added that the government should draw up a list of the beneficiaries consistent with CACOVID objectives and organize each local government to collect allocations for the people.

Speaking on the items received, Acting Commissioner for Agriculture, Abisola Olusanya noted that the food items were being repackaged by the Ministry of Agriculture to ensure each beneficiary got the right quantity of items.

Olusanya stated that in terms of the distribution modality, the state would borrow a leaf from the experience garnered during the lockdown period when it pioneered the distribution of over 50,000 food beneficiary packs.

“Under the administration of Governor Babajide Sanwo-Olu, we have taken the pains to get bags marked, to print on them the Lagos State logo, the CACOVID logo and to put these items in each pack, such that we have transparency across board,” she said.

She added that the team had repackaged 50,000 beneficiary packs so far and the redistribution would take place in the next couple of days. 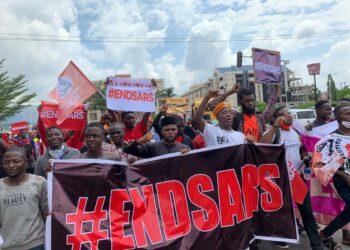