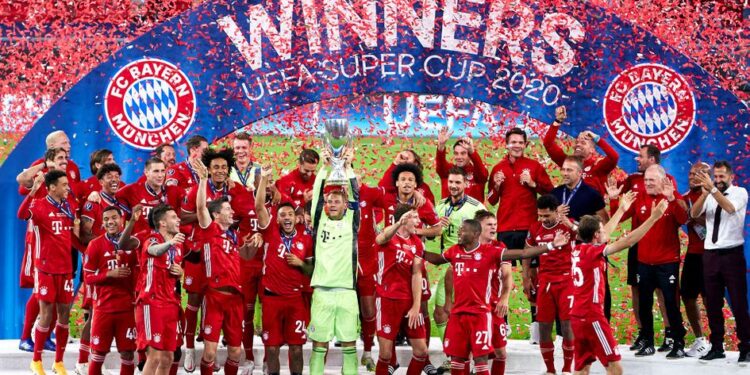 Champions of Europe Bayern Munich squared up against the Europa League Champions Sevilla last night  in front of 20,000 fans at the Puscas Arena in Budapest Hungary at the UEFA Super Cup match and it was a keenly contested game  as both Champions gave it their all and ensured that it was a spectacle and interesting matchup with plenty of actions and talking points especially for the neutrals, Bayern Munich are free scoring and on a very impressive run of 22 games unbeaten going into this one, they were largely seen as the favorites and were expected to come out tops but Julen Lopetegui’s Sevilla were very organised side and were definitely no push over and they shot in to the lead as early as the 13th minute through a Lucas Ocampos very calmly taken penalty to put the Spaniards 1 goal ahead after the man in the middle on the night, English referee Anthony Taylor  had spotted an infringement by David Alaba on Ivan Rakitic from reaching a headed pass from Luuk de Jong, and the VAR was consulted before the penalty decision was confirmed.

The game was a pretty balanced one in terms of balance of play but Hans Flick’s men had slightly the edge in terms of possessions but were really not creating much and were limited to half chances and on a particular instance, Sevilla goalkeeper Yassine Bounou was quickly off his line to claim what would have been a good scoring opportunity for the very prolific Robert Lewandowsky in the 30th minute, but 4 minutes later Leon Goretzka would finally get a very well deserved equaliser for the German Champions after a nice interchange of passing moves from Thomas Muller with the vision to pick out Lewandoski with a long ball and Lewandowsky doing well to set up Goretzka who only needed a simple side foot tap in to put his team level and it was game on with just 7 minutes into the half time.

Second 45 and it was still all Bayern with the majority of the possession and prying and trying to carve a way through to get a second goal. The pressure paid off as another brilliant interchange of sleek passing moves between Bayern’s new boy, Leroy Sane with the cross which was met by Lewandowsky to Muller  to set up Lewandowsky  who did well to put the ball beyond Yassine Bounou in goal for Sevilla, but after moments of check and re check on the VAR, the goal didn’t stand as Lewandowsky was found fractionally offside in the build up to the goal. Bayern again got the ball into the back of the net for another VAR disallowed goal  by Leroy Sane, as Lewandowsky was yet again spotted to be in an offside position and a foul play was spotted in the build up to the goal in the 64th minute.

The game dragged on as Bayern kept on the pressure in search of a winner, however they got lucky in the added time of the stipulated 90minutes as Sevilla almost stole the win  through a very well worked counter attacking move which saw substitute Youssef En-Nesyri making a nice run and was through on goal but could only manage a low shot which was turned away to the post by German keeper Manuel Nuer, a very crucial save for the match as the game went into a period of extra time afterwards as both sides could not be separated after a very intense 90minutes plus added time .

Bayern would however have the final say as they got the all-important winner through Javi Matinez who  headed home for the win in the early minutes of 1st half of extra time, Sevilla goalkeeper Bono couldn’t deal properly with a David Alaba volley as he could only push the ball toward Martinez who was making a sub-appearance in the extra period. Bayern Dominated the extra time and rightly deserved the Super Cup win and they remained unbeaten in 2020 calendar year.

According to a tweet by @OptaJose, 2- @FCBayern’s Javi Martínez has scored again in a European Super Cup final after the 2013 edition vs Chelsea, also as a sub and also in the extra time. Replay. (2- His second goal, making it 2 goals)