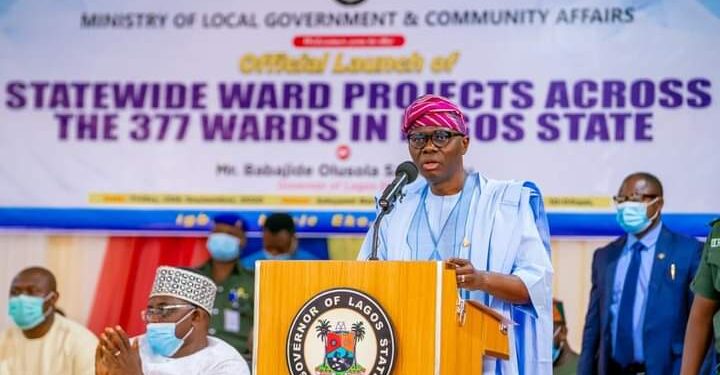 Lagos State Governor, Mr. Babajide Sanwo-Olu has flagged off 377 projects across all the State wards to solve specific problems at the grassroots level.

The projects will lead to the construction of over 250 roads and installation of 23 power projects.

Sanwo-Olu said his government initiated the interventions in response to requests by the various communities to address specific challenges.

He added execution of the projects would change the narrative about what grassroots development and Government’s responsibilities are all about.

He said: “The state-wide 377 ward projects being launched today are state intervention projects in grassroots development.

“The projects are conceived in response to requests by the various communities across the State to address specific challenges.

“These projects are not universal; they are diverse, reflecting the needs of each ward across the state.

“The implementation of the projects will commence immediately after this official flag-off, as contractors have been fully mobilized to move to site.”

Sanwo-Olu said the process of identifying the needs and the design of the projects was in line with the concept of Sustainable Development Goals (SDGs) and participatory governance in which the people were considered as key stakeholders.

The Governor described grassroots as “the bedrock of development,” stressing the projects were strategic in promoting the well-being of the people across communities.

He said his administration would continue to give residents a voice on issues that affect them.

Chairman of the Projects’ Implementation Committee and the Deputy Governor, Dr. Obafemi Hamzat, said all contractors would be mobilised to sites next Monday, noting the intervention was in demonstration of the Governor’s campaign promise to run an inclusive government.