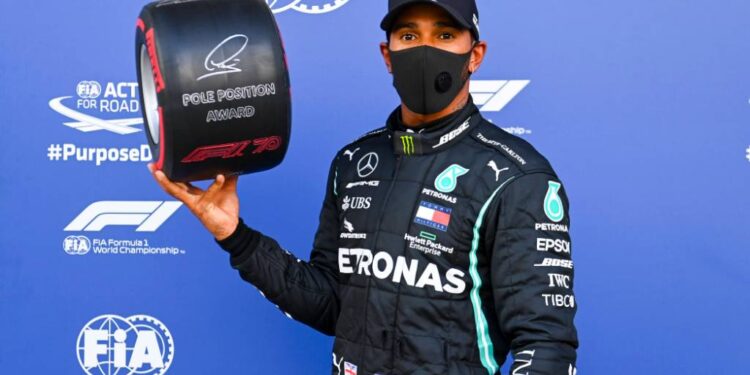 It’s the weekend of the Russian Grand prix and actions have since commenced since last Friday at the Sochi Autodrom circuit  with the free practice sessions, and then the final qualifying race went down yesterday and at the end of final qualifying, it was Lewis Hamilton who would be starting in pole position ahead of Red Bull’s Max Verstappen and Hamilton’s Mercedes teammate, Valteri Bottas made P3 place on the starting grid.

Lewis Hamilton would have the chance to equal Mack Schumacher’s record of 91 F1 wins today at the main race. Getting the pole position wasn’t a straight forward one and  definitely not pretty as it came with some drama as he was invited by the stewards for track limit infringement after the race but ended up getting a favorable outcome. He would not be facing any penalty after the race and he also survived crashing out in the early part of qualifying.

Bottas who had the slight advantage for the better part of earlier qualifying over Hamilton allowed his teammate make a very crucial overtaking move on him to steal the pole position from him and also Verstappen produced a very stunning final lap to ensure that he got P2 over Bottas, but both Bottas and Verstappen would have somewhat kind of an advantage over Hamilton when the race starts at 12:10 pm today as they would both be starting the race on more durable medium tyres as against Hamilton who would be starting on lesser softer types.

Sergio Perez secured an impressive 4th place on the starting grid for Racing point team ahead of Daniel Ricciardo for Renault team, and Carlos Sainz for Mc Laren in the 3rd row on 6th, Esteban Ocon is P7 for Renault and Lando Norris and Pierre Gasly in P8 and P9 for Mc Laren and Alpha Tauri respectively,

Alex Albion for Red Bull who won his very 1st podium place finishing in 3rd position at the last grand prix two weeks ago at the maiden Tuscan Grand Prix event could only manage the P10 position making up the final position for the top ten drivers on the starting grid.

Both Ferrari cars were conspicuously missing in the top ten as Sebastian Vettel survived a very bad crash earlier in Q2 after coming in contact with a kerb on turn 4, and thankfully he came out unhurt and to make matters worse, his teammate Charles Leclerc made contact with his left wing which slowed him down and he would be starting the race in P11, just outside the top 10, and Sebastian Vettel in P15.