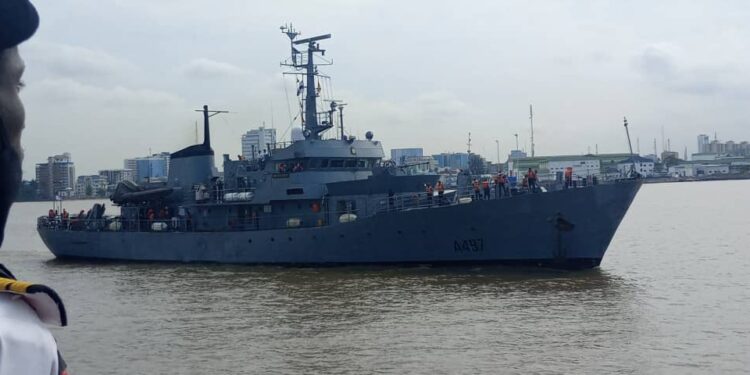 The Flag Officer Commanding (FOC) Western Naval Command, Rear Admiral Oladele Bamidele Daji alongside principal staff officers from the Command and Western Fleet has inspected ships in Lagos to ascertain overall operational preparedness of ships, units and establishments as part of the Nigerian Navy (NN) event for this year.

Speaking, Rear Admiral Daji said, “The inspection of the fleet at sea achieved the desired objective, which is to assess the state of equipment as well as the level of training of personnel in conducting various operations in different operational scenarios that were simulated at sea to prepare for the real time operations as they come.”

“So, we have gone round all the units under the WNC from Badagry, Lagos to Imeri, and we are capping it up with the inspection of the ships at sea,” he explained.

Earlier on, he continued, we had inspected the ships at harbour and the essence of the sea inspection is to actually ensure that all the systems, weapons, communications are functional.

Daji further assured newsmen that the fleets were ready for the Chief of Naval Staff (CNS) annual inspection which will come up later in the year.

“The fleets are ready especially for the Chief of Naval Staff annual inspection that is starting with the shore establishment and the sea inspection will be sometime in December.

“We will keep working on where we have noticed some deficiencies and make sure that the ships and shore establishment are ship-shaped to ensure that the mandate of each establishment is fulfilled in support and in fulfilment of the CNS strategy directives,” says the FOC.

On Thursday, 10th September this year, the FOC departed Lagos area for further inspection of Units, Bases and Establishments under the command.

During the exercise, manoeuver and evolutions were conducted which included; Vessel Boarding Search and Seizure (VBSS), launching and recovering of boats, high speed fleet manoeuver, gunnery exercise, and action station drills among others.