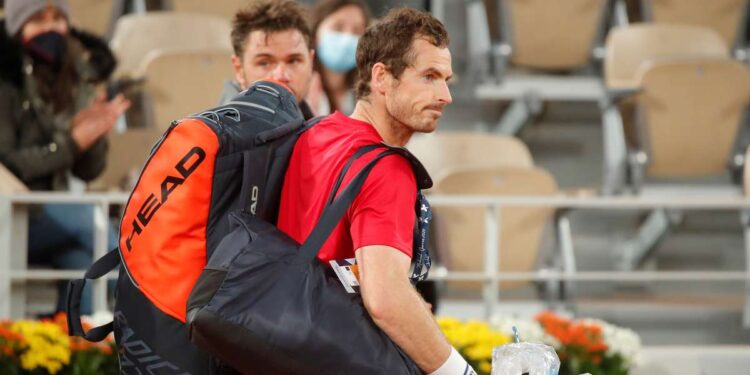 The 2020 edition of the French Open kicked off yesterday, Sunday 27th September, 2020, amidst all the COVID-19 regulations with less than a thousand fans allowed into the arena per day, and we already have early tournament casualties in the men ‘singles’ and the women.  British men player, Andy Murray who is making a return to the Clay courts at Roland Garros since 2017 when he took a break to have a hip surgery and making an entry through a wild card was brushed aside by old foe Spanish player and 2015 French Open Champion, Stanislas Wawrinka, in straight sets winning 6-1 6-3 6-2.

Murray was largely anonymous and looked clueless, he looked on with a frustrated grin and caught an image of someone that has conceded the defeat as early as the 2nd set and looked like we were still nursing the hangover of been out of the game for a while.

The 16th seeded Stan Wawrinka had an injury himself which led to him getting a knee surgery after both players met at the 2017 edition of the French Open at the Semi-final stage.

Wawrinka was having a good moment from the 1st set and he served well, even though Murray held his serve but the Spaniard was in superb form as he took 18 points and won the set 6-1.

Second set was not any better as Wawrinka’s dominance shone through as he kept putting the ball to far, sides and comers and Murray couldn’t just reach many of those balls as he watched most of the balls.

A very humbling defeat was capped up by another dominant 3rd and final set which Wawrinka dominated as Murray missed out on all the possible break points. The Spaniard raced quickly into a 5-2 lead and he only had to serve to the win which was done and dusted in an hour and 40 minutes of not too intense tennis at Roland Garros.

Hopefully Andy Murray can get his game right and bounce back to top levels and he can contend for Grand Slam titles again as this defeat was by far one of his worse performance in a Grand Slam.

Other major 1st round casualties are 9th seeded British player Johanna Konta who was stunned by the American 16-year-old teenage sensation Coco Gauff as she was beaten 6-3 6-3 to get dumped out at the French Open.

Kei Nishikori in dominant form also beat the 32nd seeded player, British Dan Evans 1-6 6-1 7-6 (7-3) 1-6 6-4 to end his participation prematurely at the 1st round at the French Open. Nishikori’s second round opposition is already confirmed as he would be playing Italy’s Stefano Travaglia.